In two days, Omer will hit a milestone; his 30th birthday. Like many his age, he hasn’t found himself. But then Omer is hardly looking. Instead he chooses to loose himself among the stacks of books at the local library, where he works. It is a respite from real life. From time to time he goes on blind dates. He meets Danny on one of his dates. 20 years old and full of enthusiasm, Danny dreams of becoming a dancer.

Shirley, Omer’s little sister, has her own problems. Aside from being Omer’s greatest annoyance, she is in an unconventional relationship with, Michal, owner of the city’s hippest coffeehouse and her boss. Just when it seems that Omer has completely lost his spark and all seems lost, Enter Ronen, the handsome journalist who ignites the flame Omer has been seeking. Everyone is hoping for a change. They are waiting for the light. The light that will thaw their frozen hearts. But only one person has the answer, Matilda Rose, the alien loving best-selling novelist can solve the issue; Is love dead or are we just looking in all the wrong places?

if one forgets for a moment that love relationships shown in the movies are homosexual and not heterosexual, it is a simple film about people trying to find love and till they find one keep on trying. There is central character who is librarian and group of his friends and similar individuals they come across.in all there are 5 main male character and they are developed well given the time constraint, especially the journalist, librarian, the young boy and the Casanova. sub plot of hero’s sister also being lesbian or their father being cross dresser seems unnecessary. there are comic moments though when their mother gets a new husband or one of the the character who works at a fashion store cracks jokes. Overall a good movie about love, commitment and relationship 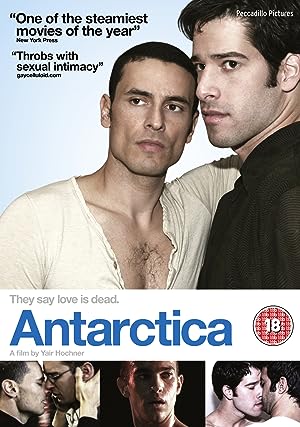 Antarctica (2008)
112 min|Drama, Romance|N/A
6.1Rating: 6.1 / 10 from 677 users
In two days, Omer will hit a milestone; his 30th birthday. Like many his age, he hasn't found himself. But then Omer is hardly looking. Instead he chooses to loose himself among the stacks …
Director: Yair Hochner
Creator: Yair Hochner
Actors: Ofer Regirer, Guy Zoaretz, Yuval Raz, Yiftach Mizrahi