It’s South Africa, 1990. Two major events are about to happen: The release of Nelson Mandela and, more importantly, it’s Spud Milton’s first year at an elite boys only private boarding school. John Milton is a boy from an ordinary background who wins a scholarship to a private school in Kwazulu-Natal, South Africa. Surrounded by boys with nicknames like Gecko, Rambo, Rain Man and Mad Dog, Spud has his hands full trying to adapt to his new home. Along the way Spud takes his first tentative steps along the path to manhood. (The path it seems could be a rather long road). Spud is an only child. He is cursed with parents from well beyond the lunatic fringe and a senile granny. His dad is a fervent anti-communist who is paranoid that the family domestic worker is running a shebeen from her room at the back of the family home. His mom is a free spirit and a teenager’s worst nightmare, whether it’s shopping for Spud’s underwear in the local supermarket, or sneaking food into her handbag at school functions. Armed with only his wits and his diary, Spud takes us from illegal night swimming to the red-hot furnace of the cricket pitch, from ghostbusting to a catastrophic family vacation. He also invites us into the mind of a boy struggling to come to terms with a strange new world, a boy whose eyes are being opened to love, friendship and complete insanity.

When I first read Spud, it made a huge impact on me. I saw the book as near perfect. Of course, when I heard about the film, I was jumping up and down. Today I went to see it. What a disappointment. It has it’s strong points: 1. John Cleese 2. Troy Sivan 3. John Cleese 4. John Cleese 5. Interesting cinematic interpretation of dairy-style book

Unfortunately I can’t think of much more. Troy Sivan is the perfect cast, he sings amazingly, acts amazingly and looks the part. John Cleese, well, I don’t really have to say anything.

The story is not at all true to the ‘near-perfect’ book. It lets out most of the high points of the book as well as all the subtleties that the fans of Spud were hoping to see in the movie. And where it does contain important points of the book, it is in some way changed. This was disappointing to say the least.

If you have read the book and have already developed a firm mental image of the characters, go see the film. If you haven’t read the book, read it first and then go see it, or better yet, rent it on DVD. This is not a film that needs to be seen on the big screen. 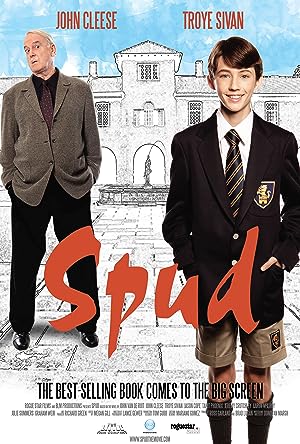 Be the first to review “Spud 2010” Cancel reply