Malony has been in conflict with the school and with the law since he was six. But Florence Blaque, a juvenile judge, and Yann, a special educator, are convinced that they can save him from the spiral of revolt and violence in which he seems to be caught for the rest of his days. Will they attain their end in spite of everything, in spite of Malony himself who is his own worst enemy?

It comes a time to take a stand. Not just for me, but for all of cinema. Malony is a horrible, cynical, opportunistic and dull affair. Malony is a trouble child an early age. At 16, he is shopped around different foster homes. His mother is in her 40’s but played by a 28 year old actress, who looks like she is Malony’s cougar girlfriend. Malony is failing school and sentenced to a youth camp after committing grand theft auto. His judge and his counselor does not want to give up on Malony and tries their best to get him some kind of education and possibility in life. Malony has skipped so much school that he will not be able to finish seventh grade – having already spent two years in every grade.

It’s kind of hard to get a grip of the plot because it is more a series events than a story. Malony is a impatient, violent and completely unlikable character. Why people still wants to help him is beyond me. He is given tons of chances by the authorities and ends up messing them up every time. He flirts with a counselor’s daughter and they end up in bed. But Malony ends up raping the girl. And for some reason, she falls in love with him. WHAT? The fact that so few critics have been bothered by this, deeply disturbs me.

A counselor get’s Malony a job, but Malony just goes around and sneers and leers at the customers. He ends up kicking a table at a pregnant woman for no reason.

The acting from the lead actor is horrible. He overacts for president and country. Catherine Deneuve sleeps through her performance. I can honestly not remember anything about the other character’s personality, except for the caricature that is the mother.

The message of the film is simple. Poor and stupid people should not reproduce, lest they will produce and even more hopeless generation. It’s like a propaganda film by Dr Goebbles, mistaken by critics as a social awareness flick. 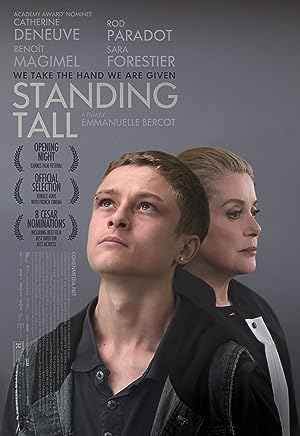 Standing Tall (2015)
120 min|Drama|13 May 2015
7.0Rating: 7.0 / 10 from 2,837 users
A juvenile judge and a special educator are convinced that they can save the young delinquent Malony from himself and his violent ways.
Director: Emmanuelle Bercot
Creator: Emmanuelle Bercot, Marcia Romano
Actors: Catherine Deneuve, Rod Paradot, Benoît Magimel, Sara Forestier