Eric Love is a 19 year old teenager who is so violent he has been ‘Starred Up’ (Moved to Adult prison) where he finds his father Neville who Eric hasn’t seen since he was 5 (since he was put into care). Neville tries to get Eric to settle down, so Eric gets a chance to go through therapy with Oliver.

Of all the films made about the British prison system David MacKenzie’s “Starred Up” may be the best. It’s deeply angry, very violent and totally without sentimentality even if its premiss, (a father and son are banged up together in the same prison), threatens to slide into melodrama. In these roles Ben Mendelsohn and relative newcomer Jack O’Connell are superb. O’Connell, in particular, is extraordinary. From the first moment he appears he’s like some frightened but very dangerous animal ready to lash out at anything and everyone, which he frequently does. They are the lynch-pins of a terrific ensemble playing fellow prisoners and various prison staff, none of whom actually appear to be acting, (but for its slightly glossy sheen this could be a documentary).

Even at their worst, most prison films tend to paint their prisons as places of almost romantic camaraderie with prisoners united as one against the brutal screws. Not here; here it’s every man for himself in a kill or be killed world where violence isn’t so much a daily occurrence but something that seems to be happening on the hour every hour while the screws are seen as mostly venal men and women perpetuating an already corrupt system. The title, by the way, refers to a prisoner who is considered highly dangerous but what this amazing film shows is that, however fouled up that system is, redemption of a kind is still possible. It was filmed in its entirety at the Crumlin Road Gaol, Belfast and at the Maze Prison, Long Kesh and it never moves outside. 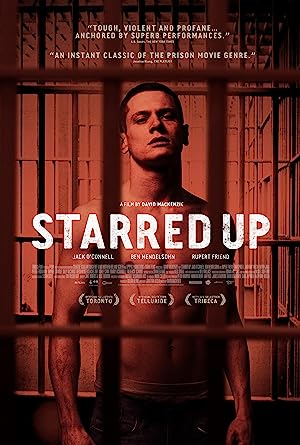 Starred Up (2013)
106 min|Crime, Drama|26 Aug 2014
7.4Rating: 7.4 / 10 from 39,093 users
Eric Love is a 19 year old teenager who is so violent he has been 'Starred Up' (Moved to Adult prison) where he finds his father Neville who Eric hasn't seen since he was 5 (since he was …
Director: David Mackenzie
Creator: Jonathan Asser
Actors: Jack O'Connell, Gilly Gilchrist, Frederick Schmidt, Edna Caskey