Pete, an eight-year-old Catholic boy growing up in the suburbs of Chicago in the mid-1970s, attends Catholic school, where as classes let out for the summer, he’s admonished by a nun to follow the path of the Lord, and not that of the Devil. Perhaps taking this message a bit too seriously, Pete decides it’s his goal for the summer to help someone get into heaven; having been told that Catholicism is the only sure path to the kingdom of the Lord, Pete decides to convert a Jew to Catholicism in order to improve their standing in the afterlife. Hoping to find a likely candidate, Pete begins visiting a nearby synagogue, where he gets to know Rabbi Jacobson, who responds to Pete’s barrage of questions with good humor. Pete also makes friends with the Rabbi’s son, Danny, who is about the same age; when he learns that Danny is seriously ill, he decides Danny would be an excellent choice for conversion. When the priest at Pete’s church informs Pete that all will be tested before they pass the Pearly Gates, he sets up a mini-decathlon and puts Danny in training as he attempts to reshape his spiritual thinking. Pete’s parents aren’t sure just what to make of Pete’s new summer project, and as they become acquainted with Rabbi Jacobson, they share their perspectives on the unexpected trials of parenting.

This movie was one of the best movies that I have seen in a very long while. It was touching and very motivating. The two young boys in this film were fabulous actors and made the story so great. It was so easy to relate to the dynamics between the two families and to feel there pain and confusion. As a mother, I would want my children to be a part in viewing this movie in order to conjure up a open conversation about it’s contents and morals. I would be concerned with anyone of any faith to not feel the same about this movie. Messages like the one presented in this movie are few and far between these days. I would recommend it for your whole family regardless of your ages or beliefs. 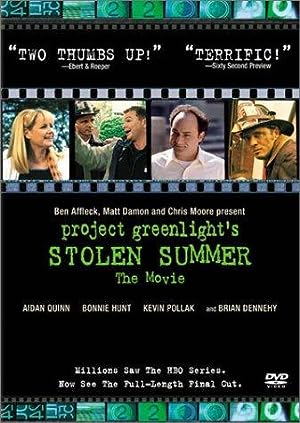 Be the first to review “Stolen Summer 2002” Cancel reply