A routine trick at a man’s apartment propels a cynical hustler into a series of strange and life-changing encounters in this stunningly photographed drama from San Francisco-based Joseph Graham. Tall and lanky with a mop of unruly dark hair, the young man makes for an attractive prostitute – handsome in body, amiable in personality and efficient in sex. He’s just out to make a buck, one guy at a time. But this coldly efficient rent boy begins to look at himself in a different way one stormy night when he finds himself lost in a maze-like apartment building. The evening begins with a tryst with a beefy but timid man unused to gay sex. Their “session” becomes surprisingly tender for both. But time is money, and he’s off – that is, he’d be off if he could find the exit. His unexpected odyssey leads him to a series of encounters: there is one with a “straight” guy with issues; a cocaine-fueled queen who thinks he knows him; an older man, hidden away in a leaky attic apartment who assists him on his journey; and a lonely young man who thinks he’s finally found a connection with someone. Sex is the commonality, but out of that commodity comes raw, unguarded emotions for all, even for the hustler. Sad, funny, sexy and touching, Strapped is an unforgettable look into one young man’s moving journey to understanding

We sometimes feel like we are lost, alone, and confused. Why not? Life is a labyrinth of trials, much like the building that the protagonist gets lost (literally and figuratively) in. Mistaking one path for another is easy, terrifying, and painful. Each path has friends and enemies, angels and demons. But if we’re lucky enough, brave enough, we just might let someone in. Getting lost finding the way seems less scary.

Strapped is one of the most excellent films I have watched in quite a while. The writing is excellent, the direction is excellent, the acting is excellent. I have so much more to say about the intelligence, the symbolism, the honesty, the multi-layered profundity, the heart, and the life-affirming testament that is this film; however, why spoil all the fun for you? 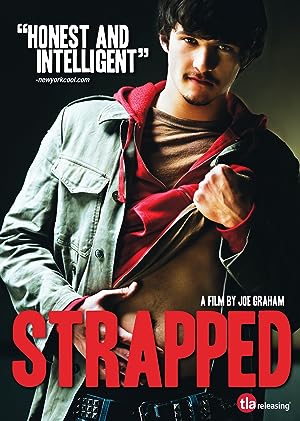