When three male strippers pull of a heist, they find themselves being tracked down by a homophobic cop. Hiding out in a frat house, our three anti-heroes find themselves getting into more trouble than they were trying to escape.

Three male strippers (Anthony Gaudette, Diego Guevara, Dan Mauro) conduct a heist on the very club they’re dancing at … and when things don’t go as planned and they’re surrounded by the police, they take a cop, Rod (Charlie Ferguson) hostage and make a daring getaway to the trio’s only straight guy Chuck’s (Dan Mauro) frat house – where the other two have to pretend they’re not gay to receive help from Chuck’s frat brothers while also explaining why they have Rod, tied up, gagged and stripped to his underpants, with them … thank God then it’s pledge week, and they throw him in with the other pledges, most of whom have let the frat brothers strip them and tie them up in order to humiliate them, just so they can get into the fraternity …

Things get out of hand when Joanne (Anna Rizzo), a cop (not so) secretly in love with Rod gets wind of where they might be. And Joanne is positively insane …

Ok, a few words up front, if you’re offended by male full frontal nudity, then this film is not for you, as uncovered penises pop into the picture on quite a few occasions here (after all, this is about male strippers and male pleges). Also, if you’re not into at times quite crude humour or insist on political correctness at all times, then better stay away.

And that said, this film is basically so much fun, a heist movie spiked with tons of gay jokes (for the record, director Richard Griffin is openly gay himself), situation comedy and random silliness, carried by a cast who all basically play caricatures – but play them well to at times give the film a rather cartoon-like feeling, which fits it very well.

In all, definitely worth a watch … if you’re in for everything mentioned above! 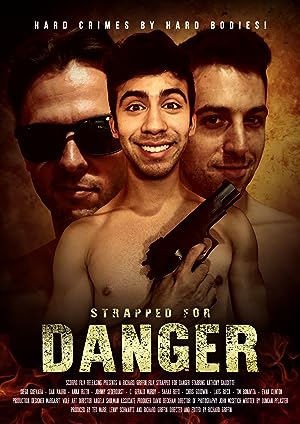 Strapped for Danger (2017)
73 min|Comedy|26 Oct 2017
6.4Rating: 6.4 / 10 from 76 users
When three male strippers pull of a heist, they find themselves being tracked down by a homophobic cop. Hiding out in a frat house, our three anti-heroes find themselves getting into more trouble than they were trying to escape.
Director: Richard Griffin
Creator: Duncan Pflaster
Actors: Anthony Gaudette, Diego Guevara, Dan Mauro, Anna Rizzo

2 reviews for Strapped for Danger 2017