When a liquor store owner finds a case of “Viper” in his cellar, he decides to sell it to the local hobos at one dollar a bottle, unaware of its true properties. The drinks causes its consumers to melt, very messily. Two homeless lads find themselves up against the effects of the toxic brew, as well as going head to head with “Bronson” a Vietnam vet with sociopathic tendencies, and the owner of the junkyard they live in.

Sure the acting is horrible, and there’s about ten or twelve incoherent unrelated plots and the special effects look like some four dollar and thirty five cent props bought from Murray’s Party Supplies but this an essential low budget schock insanity movie. Random thoughts that will run through your head when watching it include: wow, somebody actually took the time and effort to write out a screenplay for this garbage? and I wonder how many times they had to re do this entire nutty scene before the “actors” stopped cracking up at it’s sheer insanity. This is definitely a hidden gem, a true jewel if your lucky enough to live near a video store that has a copy of it. Rent it!!!!!!! 10 out of 10. 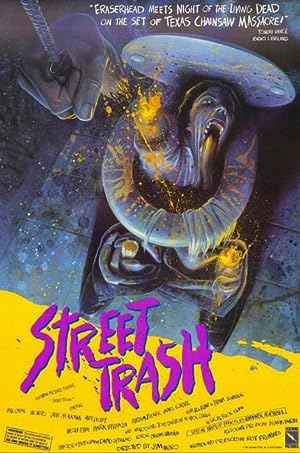 Be the first to review “Street Trash 1987 UNRATED” Cancel reply