Juan Garcia is a boy on the threshold of manhood living in a gang-controlled neighborhood. His role models could not be further apart: his older sister Angie, a single mom, struggling to gain a foothold in the white corporate world and his uncle Manny, an ex-gang member, who has fallen into an acting career playing gang bangers since his release from prison. With the future on his doorstep, Juan, like most boys, can only think of girls and is unaware of the judicial system’s hard line stance against gang affiliation.

Trejo Delivers His Best Performance Ever!

Latino or Black youth living in our urban communities have more than just their environment to contend with. More than gangs. They have a juvenile criminal system that works against them— the Three Strikes Law— a threat with power to send young lives down a spiral spin for the rest of their lives.

What is fascinating about “Strike One,” the new indie film by David Llauger Meiselman, is how realistic he portrays life in an urban community like Los Angeles’ Boyle Heights—where the scales of justice is lopsided where fairness is determined by which side of the street you live on.

Danny Trejo delivers one of his best performances ever. A very different role for him, who is considered one of the best character actors of his generation and there could be no one better to narrate this film. Trejo’s road to success has been hard earned. He grew up on the streets of Los Angeles and despite spending part of his youth and early adulthood incarcerated, Trejo rose to great accomplishment.

Is his role in “Strike One” art imitating real life? It could have been, but in the film, there is only the promise of one man willing to do anything to protect his nephew from the hardships he experienced.

Llauger-Meiselman brings a new urgency to the dangers lurking about in a community where Latino youth faced with the temptations of a gang-criminal life and an unjust law that shadows them like a predator waiting to arrest and throw them away through a broken juvenile criminal law system.

Through his subjective camera, Llauger-Meiselman brings an intimate connection by allowing the movie audience to know exactly how his characters feel, or want to feel, or fear to feel.

“Strike One” unfolds with Juan Garcia (Johnny Ortiz), a boy on the threshold of manhood who is living in a gang-controlled neighborhood. His role models could not be further apart: His older sister Angie (Maria Isa)—a single mom, struggling in the white corporate world; and his uncle Manny (Trejo), an ex-gang member, who has fallen into an acting career playing gang bangers since his release from prison. Juan is caught between a sister he loves and an uncle he respects and admires. And then there is that deadly web of gang affiliation and the judicial system created to work against him.

Breakout artist, Johnny Ortiz (McFarland USA, American Crime), in his very first film, is an impressive Juan. Ortiz comes from a Los Angeles suburb not unlike Boyle Heights, and has stated that had it not been for this role, he might have been the real-life Juan.

The reason this film and its storyline is important is because California’s Three Strike Law devastates the lives of 80% of the youth living in targeted communities like Boyle Heights. “Strike One” should be a mandatory must-watch film for all Latino and Black youth.

It was wonderful to once again see Billy Gallo as Sgt. Veritas give a powerful performance. Veritas and Manny have an old ax to grind. Alma Martinez, as Juan’s mother is believable with the way she brings dignity as Juan’s mother. Veteran actors James Russo, Reginald VelJohnson and French Stewart, Lawrence Smiglys and Zahn McClarnon round out the cast and they do not disappoint.

“Strike One” has a fantastic soundtrack of original hip-hop and Latin beat music. Johnny Wilson did a phenomenal job with composing the music.

From start to finish, “Strike One” is exciting, gritty and real. Movie viewers will leave with a better understanding of the challenges faced by everyone living in communities like Boyle Heights– where they must deal with “life chose me” circumstances like the family portrayed in the film.

Entertaining. Great Performances—with a dramatic interpretation of how devastating the Three Strikes Law is. 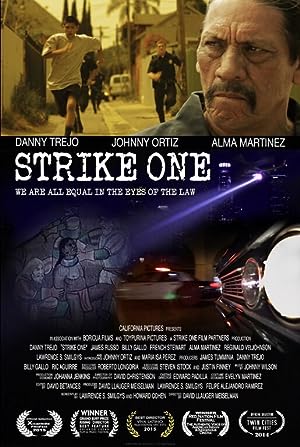 Strike One (2014)
102 min|Action, Crime, Drama|23 Oct 2014
4.8Rating: 4.8 / 10 from 245 users
A young boy living in a gang-controlled place finds that he might be able to get by in his neighborhood, but possibly never get out because he is affiliated with gang-related activities.
Director: David Llauger Meiselman
Creator: Howard Cohen, Lawrence Smilgys (screenplay), Lawrence Smilgys
Actors: Alan Corral, Danny Trejo, James Russo, Billy Gallo

Be the first to review “Strike One 2014” Cancel reply