A family in route to New Guinea is shipwrecked on a deserted tropical island. They are forced to remain on the island because of the damage to the ship and the pirates that are roaming the islands. They create a home on the island (centering around a huge tree house) and explore the island and its wildlife. Plenty of adventure ensues as the family deals with issues of survival and pirates, and the brothers must learn how to live on the island with an uncertain future.

This is a Disney adventure film at its best. Excitement, adventure, far off exotic places, shipwrecks, pirates – all the ingredients for a thrilling recipe of family ties that bind (love), and respect for a father who protects and leads his family to battle the hostile elements of the outside world in order to survive.

Tigers in pits, wild animals domesticated, outside fresh air away from all civilization, this is a movie for the whole family to watch together, preferably on a big screen at a theatre, where the producers designed to have it seen in the first place.

This movie is fun, exciting and scary with pirate ships and uphill battles that make this one worth owning.

I remember my Dad took me to see this film when I was 7 years old and the nostalgia of security of family rooted in a firm grounding and foundation of family tradition, for me made this film a memorable one for all time. I hope you enjoy this one too for old time’s sake. 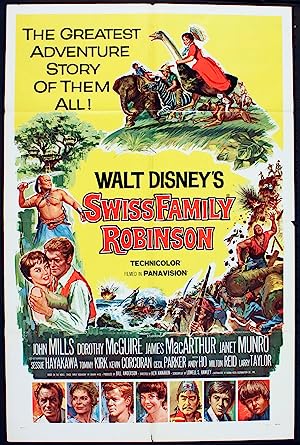 Be the first to review “Swiss Family Robinson 1960” Cancel reply