Mikaela had a sex reassignment surgery . One night out she meets a guy who follows her home. The movie Undress me examines our perceptions of gender and how our identity can be formed by the perceptions of others.

A guy pulls a girl at a bar then on the way back to her place she makes the mistake of revealing to him that she was born a man.

As a transgender person myself I feel a personal connection to the character ‘Mikaela. Revealing that she used to be a man turned out to be a huge mistake, as instead of making love to her at her house it turns into a game of twenty questions about her operations and everything.

Putting a transgender person on the spot like this is not just rude but downright offensive to the person, especially asking the person their ‘old name’ or ‘real name’.

People should watch this to learn how to treat as transgender person properly, Han ruined a good time by making Mikaela feel uncomfortable and you could see it in her face and general mood.

The acting in this short movie was superb even although the dialog wasn’t in English. It demonstrates perfectly why sometimes you should just keep your mouth shut. People often say it is their right to ask questions which is true but they need to learn when to exercise a little self control.

Han could have had some great sex with Mikaela and then asked questions afterward but he totally ruined the romance of the moment. 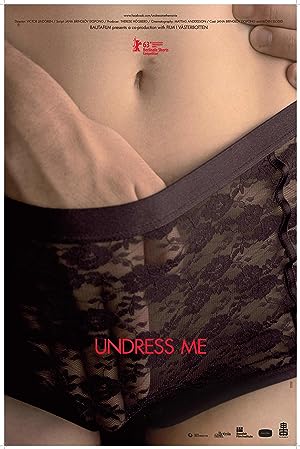 Undress Me (2012)
15 min|Short, Drama|13 Oct 2012
5.4Rating: 5.4 / 10 from 375 users
Mikaela had a sex reassignment surgery . One night out she meets a guy who follows her home. The movie Undress me examines our perceptions of gender and how our identity can be formed by the perceptions of others.
Director: Victor Lindgren
Creator: Jana Bringlöv Ekspong (screenplay), Victor Lindgren (screenplay)
Actors: Jana Bringlöv Ekspong, Björn Elgerd