Karchy (Brad Renfro) is a boy in school who has moved from Hungary to America in the 1960s. He is struggling in school and trying to adjust to America’s culture. He then hears about a radio DJ, Billy Magic (Kevin Bacon), who holds a contest for a Student Hall of Fame every week. When Karchy finally wins after several weeks, he spends more time with Billy Magic…a man with money, girls, and glam. Karchy thinks that, by spending time with Magic, he can become “cool”. He then starts telling lies, to make himself seem greater than he really is. But when his lies begin hurting the people he cares about, he realizes that it isn’t worth telling lies if it affects your friends. Afterwards, he learns to accept himself for the person he is, and gives up lying. And as for Billy Magic, it turns out that he pays his price for all the lies that he has told as well….

Yes, I live in Northeast Ohio, but that’s not the only reason I truly enjoyed this movie. The daughter of an acquaintance, ‘Giggly Girl’ Angelique Osborne, had a tiny part and I originally watched to see her. Now every time Bravo plays this movie on IFC Fridays, the phone comes off the hook, the popcorn is popped and I get good and comfy. The sentiment portrayed here, although it’s roughly 15 years before my time, pulls me right in. The struggles of wanting to feel important (or at least to fit in), where to draw the lines of loyalty and figuring out what makes any of us happy are timeless. It never occurs to me that I’m watching Kevin Bacon or Brad Renfro. They become their characters. (Kevin Bacon proves he has a range most people don’t realize and Brad Renfro, although beautiful to look at, also has that un-namable quality that makes you feel you’re watching a future legend. Let’s pray he finds his way safely.) Just as you never think about the set or the camera during a genuinely good movie, all the components of Telling Lies in America flow beautifully.

After reading some of the other reviews here, it seems some people can’t be entertained with a good story and good acting. Some movies don’t have to resort to the typical Hollywood recipe in order to leave a positive imprint in your mind. Too bad you have such a short attention span. 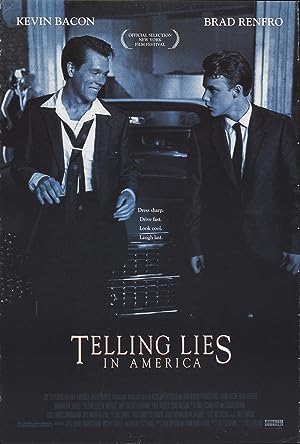