The story of a bullied fifteen-year-old boy in a small town as he struggles to adjust to his difficult life.

Motion Picture Rating (MPAA)
Rated R for sexual content, language and some drug and alcohol use – all involving teens

Terri (Jacob Wysocki) is a misfit who comes to school in his pajamas. He lives with his spaced out uncle (Creed Bratton). His vice principal Mr Fitzgerald (Jon C. Reilly) tries to reach out to him. Terri becomes friends with two other misfits. Chad (Bridger Zadina) is an angry wired loner, and Heather (Olivia Crocicchia) is the disgraced beautiful girl who got caught in a sexually permissive situation while in class.

Jacob Wysocki is playing a very low energy character. They have to figure out how to show that character in a compelling manner. Watching him getting picked on all the time wasn’t such a fun watch. Bridger Zadina has a nice role as the energetic crazy little guy. I think it would have been better to start the movie with them as friends. At least the movie would have the energy to drive it along. Olivia Crocicchia does a good job as the girl. The big scene feels voyeuristic. But all three kids play their roles well. It’s an odd little film. I just wish they showed what happened to their friendship after that night. 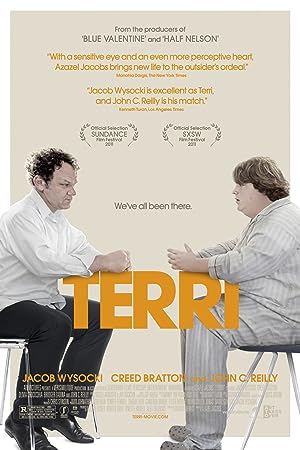