Home » Movies in English » The Awakening of Spring 2008

The Awakening of Spring 2008

Based on the 1891 play “Spring Awakening,” this filmed stage drama examines the tensions and confusion of young people as their growing sexual awareness conflicts with the repressive social environment around them. John Aniston and Victoria Tennant are part of a veteran cast in this earnest and explicit study of the dangerous tension between youthful urges and society’s rules. The film is directed by Arthur Allan Seidelman.

First of all, it’s basically a photographed stage play, though it’s all done in a studio (with neutral backdrops and extremely minimal scenery), not in a theatre in front of an audience. If that turns you off, okay, but it’s hardly unprecedented.

Apart from that annoying clarinet, I quite like it. It’s a nice to see the Wedekind play done straight (though liberties are taken, names are anglicized and marks become dollars), not to take anything away from the musical “Spring’s Awakening.”

Although the attitude towards sex education may have changed, and our mores, and the amount of information available to children, human nature has not. The way the people grope for answers and try to understand their own feelings and impulses and physicality is timeless.

The acting under Seidelman’s direction is very good. Jesse Lee Soffer is very charismatic, Constance Towers is excellent. Bridget Moloney does wonderful things with her little part. There is some tasteful and artistically justified nudity, none of it full frontal.

A clever idea of Seidelman’s is to have the teachers (but not the headmaster) in the faculty meeting where Michael is expelled wear carnival masks. It allows them to be doubled (which one senses they are) by the young actors playing the students and thereby adds an extra dimension to the caricatures they basically are.

But over all, the spareness of the production, the fact that it focuses on the generations in the way it does, and the English names and places (New Hampshire is actually mentioned) cause it to dialogue with “Our Town.” It becomes the more unflinching cousin of the Wilder play. The dead even come back. 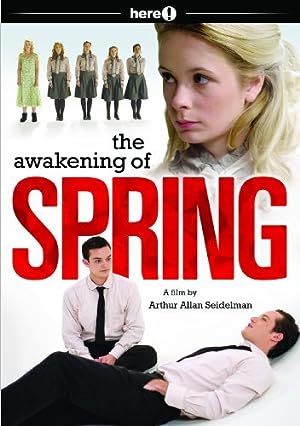