The Beautiful Beast 2006 with English Subtitles

La Belle Bête is a powerful study of the conflict between beauty and ugliness, hate and love. The story revolves around three main characters. At the center, Patrice, a beautiful but mindless youth stands gazing at his image in the water. Around him move his ugly sister Isabelle-Marie, and his frivolous mother Louise, the first lost in love and hate for her brother’s beauty, the second seeing it as an adornment for herself. Into this small, obsessed universe come a blind boy and an elegant fop from the outside world. At once, the pattern breaks and events move forward into a terrifying denouement.

Director Karim Hussain’s LA BELLE BETE, adapted from a book by acclaimed novelist Marie- Claire Blais, feels like a great Louis Malle or Eric Rohmer film from the 1970’s that somehow slipped through the cracks. Austere and pared-to-the-bone, both visually and emotionally, the story focuses on the insanely-screwed up relationship between an aging (but still sexy) mother, her oddball daughter, and the beautiful man/boy of a son that they both long to possess and control. Suffice to say this is NOT Norman Rockwell’s vision of a happy family. Terrific performances all around in three very difficult roles aided by Hussain’s carefully calibrated direction and cinematography (he also served as DP on the film.) A dense, poetic and emotionally harrowing film, this one is well worth the effort. 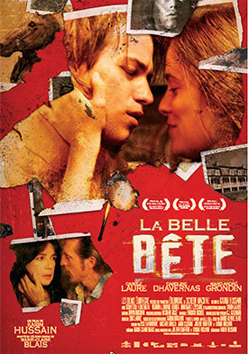