Thomas is turning 16. His dad’s in the army and they’ve just moved to a town in New South Wales; his mom is pregnant; his older brother, Charlie, who’s autistic, has his own adolescent sexual issues. Thomas finds Charlie an embarrassment in public, so when Thomas is attracted to Jackie, a girl in his swim class, Charlie presents any number of obstacles when she drops by their house, when the three of them go for a walk, and during a family birthday dinner. Can Thomas find a way to enter the world of teen romance and still be his brother’s keeper, or is Charlie’s disability going to prove more than Thomas can handle?

It’s a pity this film will not be more widely seen. It is an authentic demonstration of what it’s like to live with one of the most enigmatic of mental disorders, autism, which afflicts about one person in 1000 (the more common and milder Asperger’s syndrome affects about 6 in every thousand). Elissa Down, the maker of the film, has personal experience  two of her brothers are autistic  and with the aid of some truly accomplished acting she avoids cheap dramatics and conveys some genuine feeling.

The family portrayed has its eccentricities but you could not describe it as dysfunctional. Dad (Eric Thompson) and Mum (Tony Collette) not only have a strong love for their autistic teenager Charlie (Luke Ford) but they have learned to cope with his behaviour. The dramatic tension comes from younger brother Thomas (Rhys Wakefield) who loves the brother he has grown up with but finds the effect Charlie’s’ behaviour has on other people hard to take. Charlie has a few less than endearing habits like throwing tantrums at supermarket checkouts and bursting into other people’s houses to use their toilet. The general adolescent horror of people who are different doesn’t help much either  having a “spastic” as a brother is not good for the image. Yet Thomas’s developing relationship with neighbour and fellow lifesaving squad member Jackie (Gemma Ward) gets a positive push from his situation.

As director, Elissa Down has a nice light touch, and the prejudice and distaste the family have to deal with are neatly sketched in. There are plenty of amusing moments; when a fight breaks out in a bus queue outside a high school several male teachers try ineffectually to stop it and it is the tiny but determined female lifesaving coach who, furiously blowing her whistle, restores order. Tough army NCO Dad holds conversations with his teddy bear and the two brothers wind up on stage together as dancing monkeys after Charlie’s original partner throws a tantrum.

It has been suggested that autism, which has a strong genetic component, is a variation on normal rather than a defect, but its severely disabling nature means it has to be regarded as a malfunction. Autistic savants with freakish mathematic powers a la “Rainman” are extremely rare. People with mild forms of autism can function quite well in society, but Charlie is not one of those and will require care for the rest of his life. All this film is asking is for a little understanding of the pressures on families who have to support people like Charlie. I wish one of the commercial channels would show this in prime time instead of the usual reality show crap. 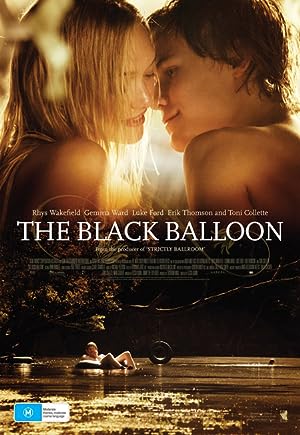 The Black Balloon (2008)
97 min|Drama, Romance|06 Mar 2008
7.3Rating: 7.3 / 10 from 8,219 users
All Thomas wants is a normal adolescence but his autistic brother, Charlie, thwarts his every opportunity. Will Thomas, with the help of his girlfriend, Jackie, accept his brother?
Director: Elissa Down
Creator: Elissa Down, Jimmy Jack
Actors: Rhys Wakefield, Luke Ford, Toni Collette, Erik Thomson

Be the first to review “The Black Balloon 2008” Cancel reply