Rasmus arrives in Copenhagen determined to find his mother whom he has never met. Having just arrived at Copenhagen Central Station Rasmus is approached by Nicklas who wants Rasmus to help him by keeping a stolen IPod. Rasmus does so and to return the favor Nicklas offers to give Rasmus a ride to his mother’s house. Reluctantly Rasmus accepts the offer and that kicks off a day that holds lots of fun and reveals hidden feelings.

This was a very beautiful film with two young actors whose faces were very expressive of their personal sense of unsureness and disconnectedness with the world, yet wishing to demonstrate a bravado and control of their personal circumstances. The opening shots of the film showed the yearning and glistening hope in the eyes of the boy, Rasmus, as he looked out the train window, contrasted with the harsh face of a middle-aged stranger sitting next to him on the train whose face showed the angry lines of a firm acceptance of his place in hard world where dreams won’t come true. One can see in that that youth is not apt to find much of value from people such as those, who are more apt to destroy their spirit than they are to ignite it.

In the train station, the other boy, Niklas, almost by a kind of bodily magnetism instantly connects with Rasmus as someone he can trust to help him by holding a stolen item while he escapes from men who are pursuing him. A while later, Niklas, having escaped from the pursuing men, meets up with Rasmus and while it seems that Rasmus has a vague destination he is heading for that he doesn’t feel like revealing to Niklas, Niklas convinces him that they need to go there together with Rasmus riding in the cart of Rasmus’s bicycle cart. And that really was the true journey, the two of them toward, or with, each other, they who share certain personal circumstances and need.

This action of them traveling together seemed to put them together in their own isolated bubble. Much of the movie was simply their traveling together throughout the city of Copenhagen from one destination to another (which I appreciated seeing, as while I have passed through Copenhagen, I haven’t seen very much of it), but the beauty of the city, the simple shared exuberance of the boys as they felt the wind in their hair and a feeling of their own motive power, and the various expressions on their faces, sometimes wide open, sometimes cautiously masked, tell the true story without a need for words. And what words there were, were pointed and expressive, and throughout those conversations the boys were continually reaching out in yearning for connection, and then drawing back into unsureness, wavering on that balance beam between “yes I need” and “no I don’t”.

The title of the movie, “The Boy Who Couldn’t Swim”, made me think of a wise Jewish saying that I learned about in a psychology book, “A father’s job is to teach his children how to swim.” While at first that seems trivial, you come to realize that “swimming” is metaphorical of leaving the safety of home and venturing out bit by bit into an alien and dangerous world (or an uncaring and exploitative one). The father is not to hang onto his children, but to help them grow up into a secure adulthood. So what of those children who have not been “taught how to swim?” How do they maneuver out in this world without having had a secure center to start out from? Perhaps they can have another chance, by finding helpers along the way, if only they can recognize them and take the risk of connecting with them when they find them. 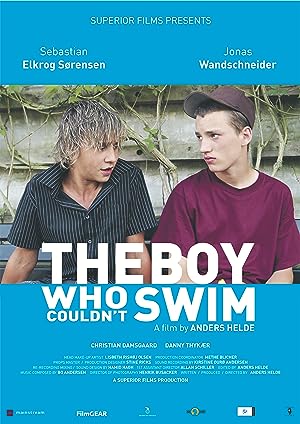 The Boy Who Couldn't Swim (2011)
33 min|Short, Comedy, Drama|01 Apr 2012
5.6Rating: 5.6 / 10 from 369 users
Two teen boys meet each other by chance in Copenhagen and team up to find one of the boys' mother. Will they find her or will they maybe find the thing that they are really missing in their lives instead?
Director: Anders Helde
Creator: Anders Helde
Actors: Jonas Wandschneider, Sebastian Elkrog Sørensen, Christian Damsgaard, Danny Thykær