Home » Movies in English » The Boy Who Cried Werewolf 2010

The Boy Who Cried Werewolf 2010

A family inherited a castle in Romania they go to see the castle where something weird is going on before she knows it a young woman called Jordan the daughter in the family is turning into a werewolf after this trip the families life changes forever.

After inheriting a family castle in Romania, a family discovers the dark secret behind the local legend of a vicious beast roaming the city as they race to stop a horde of vampires from taking control of the castle.

This here turned out to be quite an enjoyable and entertaining kiddie-centered horror-comedy. There’s a lot of good in this about making an even mix between tween-inspired parts and more normal horror motifs, and there’s plenty to both sides in here. The tween backbone here is all well-handled with the different attitudes toward the single father dating, the romance for once isn’t obtrusive to the story in detriment for the actual horror, and the beginning where they explore the castle is just filled with some quality gags that really showcase the goofier humor present that really appeals to kids. From the gags trying to scare the sister to the constant sibling-like digs on each other and the side-splitting recurring gag with a character’s name, there’s some really funny stuff in here and it gets better once the transformation occurs. The antics that depict the transformation, from the heightened sense and reactions to the lessening of objection towards previously-objectionable attitudes and how their date goes which is constantly threatened by her burgeoning abilities for some nice laughs but knows to transition into horror territory nicely as once those abilities creep in, the explanation and back-story about the creature amongst the town’s history is wonderfully handled. It makes for a pretty enjoyable time by creating a pretty strong connection through the twisted mythology with the action in the last half which is just non-stop brawling between the two werewolves and the vampire clan through the catacombs under the castle, through the cemetery and finally into the neighboring warehouse providing plenty of fun times as the fight progresses, and overall this is mixed quite nicely with the humorous aspects of the story. The fact that the creatures are done with practical make-up effects that look rather impressive for the realism and great they look in design and movement is another key factor here, and the only real flaws come from the beginnings of their life. The trouble it goes to set her up as a goofy klutz only to be saved by the werewolf curse is way too clichéd and feels too overwrought to be of much originality. As well, the whole thing is dropped once they get to the castle anyway, leaving the inclusion rather curious. Otherwise, there’s not much to dislike here. 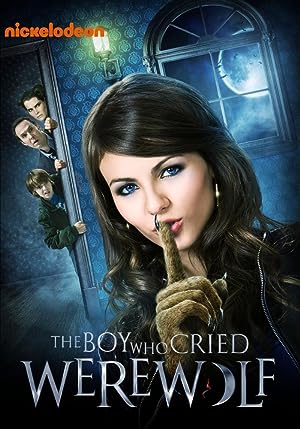 The Boy Who Cried Werewolf (2010)
83 min|Comedy, Family, Fantasy|22 Oct 2010
6.2Rating: 6.2 / 10 from 2,356 users
A Californian family inherits a castle in Romania. This is especially exciting to the son, who is obsessed with monsters. And he is not disappointed.
Director: Eric Bross
Creator: Art Edler Brown, Douglas Sloan
Actors: Victoria Justice, Chase Ellison, Anna Galvin, Matt Winston