This parable looks at public reaction when the hair of an American war orphan mysteriously turns green.

This film really touched me as a child. Firstly, it was the only serious film about a kid, with a kid as the star, that I had ever seen. None of this Disney stuff. Though later came the ‘5,000 Fingers of Dr.T’, another great film for youngsters. Secondly, it was about a child’s pain and inner life. There are a few platitudes thrown around by the wooden adults but the film seems to aim at exposing this kind of no-communication. It just isolates and abandons a youngster when they most need a strong and comforting adult connection.

Every time I see this film again it is just as good as the first time. Another interesting aspect of this film’s story is that although the boy has lost both of his parents during WWII, he has become stuck and needs to move on and incorporate this difficult time. And in doing so he becomes aware of the many WWII orphans everywhere and becomes able to identify himself with the many children who are in his own circumstances or worse. He doesn’t feel so alone. He finds that he truly cares about the suffering of other orphans and wants to do something to alleviate this suffering.

There! And I didn’t give away the ‘green hair’ thing. I have a collection of anti-war films- Glory-Three Kings-Courage Under Fire-Coming Home. I only need “The Best Years of our Lives’ and the ‘Boy with Green Hair’ to make it complete. 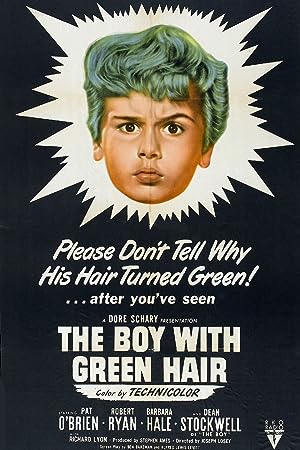