Home » Non-English with Subtitles » The Darkness 2016 with English Subtitles

The Darkness 2016 with English Subtitles

In this coming of age movie a boy living with his father, brother and sister in a house in the woods is tormented by a unseen monster.

At the beginning of the story, they find themselves holed-up in a random cabin somewhere deep in a forest, and they were, in effect, “hiding.” Hiding from what? Well something, unclear, had happened in the world outside. Indeed at the beginning of the film, the father and sons would don gas masks (!) whenever they stepped outside. There also seemed to be giant spider-like (alien?) monsters outside. However, these monsters are never really seen even though they are occasionally heard (the whole shack _shakes_ violently whenever one of the monsters seems to be foraging outside). However, since these monsters are _never_ really seen and about midway through the story, the 10 year old son Argel discovers that he doesn’t really need a gas mask when he walks out outside, both he and his younger sister (the older son disappears early in the film) begin to wonder IF THE FATHER IS JUST “MAKING IT ALL UP.” Maybe HE’S making the whole house shake in some way — blaming this on “the monsters” — to keep his two remaining children “scared.” And there it is: Throughout the whole film, the audience also wonders if the GIANT spider-like monsters” are REAL or whether the father is somehow faking it all, in an attempt to keep his remaining children “in line.” 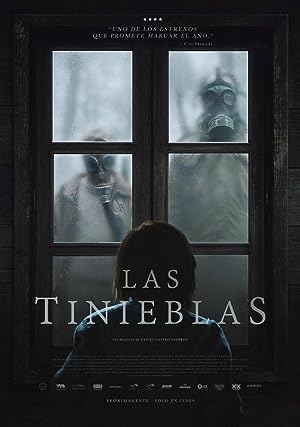 1 review for The Darkness 2016 with English Subtitles