With her husband perpetually away at work, a mother raises her children virtually alone. Her teenage son is testing the waters of the adult world, and early one morning she wakes to find the dead body of his gay lover on the beach of their rural lakeside home. What would you do? What is rational and what do you do to protect your child? How far do you go and when do you stop?

Motion Picture Rating (MPAA)
Rated R for some violence and language, and for a strong sex scene

A word of advice: when disposing of a corpse in a huge lake, dump it in the shallowest waters available. This way, you can guarantee it will be found almost straight away, thus plunging you into an abyss of blackmail, double-cross and MURDER… Also, when being blackmailed by bad guys, make sure one of them is actually good ON THE INSIDE and that his boss is a useless, unthreatening dope. Who looks like he’s wearing a toupee. Also, if you are a married woman, try to get plunged into an abyss of blackmail, double-cross and MURDER when your husband is away at sea. This serves two functions: 1) It means you have to carry the movie yourself. Which, for the admirably restrained Tilda Swinton (is she named after the rice, or is the rice named after her?) is not difficult. Imagine if she weren’t in it. What would be the point of seeing it? 2) It allows lazy viewers (most UK critics, especially) to bask in their brilliant insight – “the gay son is seeking a father figure in his real father’s absence, and the wife is seeking a husband figure. Do you see?” Also, if you are planning a career as a bad guy, then either be really bad and start beating people up when they can’t get the money together, or just forget it right now. You’re not cut out for this sort of work. ALSO, if you are making movies which, you hope, use a standard noir plot-line on which to hang serious, like, issues and stuff, then please (I’m asking you nicely) make sure the standard noir plot line is watertight. No plot-holes. No utterly implausible events. No scenes that will make the average audience member (heck, the average five year-old) howl with derision. That way, your serious, like, issues and stuff, will be much more impressive. Alternatively, of course, you could just make a really good noir thriller with no pretensions to anything loftier. Hey, it worked for Hitchcock, “The Usual Suspects” and lord knows how many others. But that would probably be beneath the worthy but inept people who made “The Deep End”. 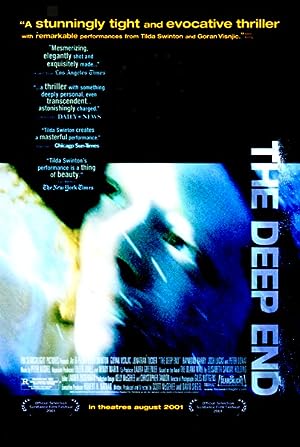 Be the first to review “The Deep End 2001” Cancel reply