In the Kanba household, the grandfather Koichi lives with his son Shusaku and his three boys. Shusakuxe2x80x99s wife reacts in horror after discovering him having sex with his father. Shusaku is a biologist and explains to her that his father is the carrier of a so-far undiscovered virus that has infected the rest of them and made them want to have sex with only the grandfather. At the same time, the virus also prevents any of them from growing any older. After she leaves, the men takes turns having sex with the grandfather.

I was attracted to The Family Complete due to its science-fictional premise about a virus that causes everyone who comes into contact with the prime carrier to develop a compulsion to have sex with only that person and never grow any older. The festival program notes also described it as having a considerable taboo charge in being upfront about what it shows, not to mention that all of the sexual relations are not only gay but also incestual.

All of that said, The Family Complete is a tedious film. I need to be careful here. I donxe2x80x99t want this to read as the straight critic getting intolerant and reacting in abhorrence to seeing frankly depicted gay sex scenes on the screen. I have no problem with any of that. More to the point, the so-called gay sex controversy is a complete non-issue. There are one or two tumblings, nothing graphic, a couple of erection shots and that is about that. Oddly, Koichi Imaizumi seems to invest more erotic interest in an earlier straight scene with the wife bringing home a mask with a large dildo-shaped nose and making the husband fellate this and then later rectally violating him with it than he does any of the gay sex scenes. Certainly, this has to be the dullest taboo-breaking film I have ever sat down to watch. 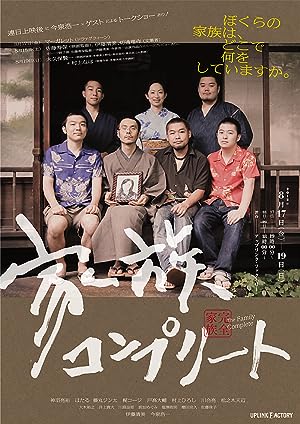 2 reviews for The Family Complete 2010