This film tells the story of a university student in Hong Kong, who lives with his mother and has a Catholic girlfriend. One day, he attends a class on Greek philosophy, and he gets intrigued by the professor. Deeper and deeper, he is drawn into the mysterious world of sexual seduction.

“Utopians” is quite different from the recent Scud films. It has philosophical, religious and political elements in it, which is the first time for Scud’s films. The story is told in a linear way, making it very easy to understand. The university Student, Hins, is very likable, and I think people can relate to him and his experiences of self discovery. The girlfriend is an interesting character too, and plays a pivotal role in the story. I like the ending, it is a bit of a surprise for me. The courthouse scene moved me to tears because it is very touching. I notice that several scenes are continuous long shots, such as the first scene, and also the beach scene where San Sebastian is tied up on a tree. The artistic elements in “Utopians” are pronounced, even for the non discerning eyes.

I also like the fact that there is a mix of Cantonese and Mandarin, and some speaking in their native language and some as a foreign tongue. I think this promotes acceptance and harmony within the divided Hong Kong, which is something that is somewhat related to the point of the film.

This film is accessible, light and engaging. I enjoyed it very much. 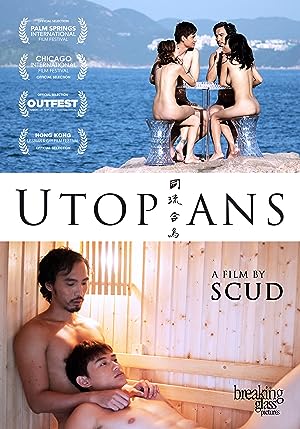