The Burnetts are dysfunctional. Jack and Bunnie barely speak, he fantasizes about women at work, she’s having an affair with a neighbor and possibly others. Daughter Kelly is foul-mouthed; their son Eric is a militant Christian and an excellent shot. Bunnie’s rich mom tries to control things. While a dead peeping Tom hangs undiscovered in a tree outside their bedroom window, Bunnie sustains a head injury and wakes up unable to remember anything after the first days of their marriage. Her newlywed sweetness infuses the family as Jack sorts through issues at work, Eric discovers flaws in his Christian posse, and Kelly makes friends with a lesbian classmate. Can this change of personality last?

This movie is a pleasant surprise, with a great cast and a “Twin Peaks” sense of weirdness underneath the veneer of suburbia. Hope Davis is a bored, bitchy housewife who pours her energy into fund raisers for ridiculous causes and a kinky affair with her neighbor. Her daughter is the school slut, her son is a mixed up Jesus freak misfit with an unexpected gift for target shooting and her husband, Dermot Mulroney, is in a dead end job trying to please a boss he hates. It all turns into a crazy do-over when wifey hits her head during one of her sexual escapades and wakes up with amnesia. Gang bangers, a football star literally caught with his pants down and a dope smoking priest (played to the hilt by Keith Carradine)all figure in to a madcap climax. “Family Tree” is a gem, don’t miss it. 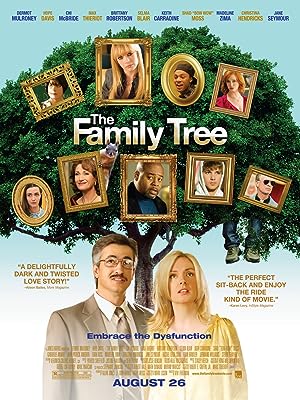 Be the first to review “The Family Tree 2011” Cancel reply