The girl Maryann has just moved to the house of her Grandfather and Grandmother in the countryside after losing her parents. She is lonely and misses her former friends and decides to wander around the area. She finds the secluded boy Andy, who lives alone with his mother, the surgeon Dr. Katherine Young, and his father, the nurse Richard Young, in an isolated house. They immediately befriend each other and she enters in his room through the window to play video-game with him since Andy depends on a wheelchair to locomote. On the next day, Maryann visits her new friend again and Richard let her in to play with Andy. On the next day, Katherine does not allow Maryann to visit her son and she goes to the house of her grandparents to forbid Maryann to visit her son. However Maryann insists on visiting Andy when his parents are absent; out of the blue, they return and Maryann is trapped inside the house. She goes to the basement expecting to find a way out and stumbles with a dark secret. …

Adventurous girl befriends a dying boy and uncovers a dark secret.
This is carefully put together and well acted by the girl and boy. The obsessive mother looked like she was heading for Kathy Bates intensity, but I think the punches were pulled in the end.
Problem I had with this was it starts as a conventional family drama and only ups the stakes halfway through, and even then it never develops a sense of menace. It’s as if they thought the plot reveal alone would elevate the story beyond the Nancy Drew level.
Also the pace is pedestrian. The director gets the technicals spot on, but I guess the screenplay didn’t give enough to allow the tension to mount. 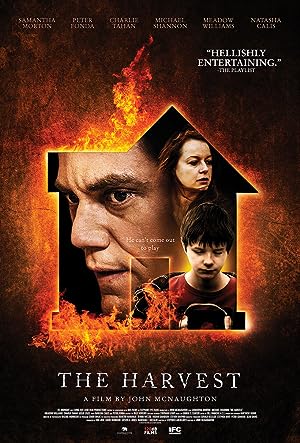 Be the first to review “The Harvest 2015” Cancel reply