Home » Movies in English » The Hippopotamus 2017

A country manor mystery that’s actually a deliciously wicked comedy of manners, The Hippopotamus is a rollicking adaptation of the best-selling novel by Stephen Fry. It centers on a lapsed poet, failed drama critic, redundant husband and hard-working drunk, Ted Wallace (the mellifluously voiced Roger Allam in a rare starring role). Fired from his newspaper job, Ted leaps at the chance to drown his sorrows at his old friend’s country estate, Swafford Hall. A series of spiritual healings have recently put the household in a tizzy. The purported miracle worker is his hosts’ teenage son, Ted’s godson, David (Tommy Knight). Lord and Lady Logan are set on sharing their boy’s “gift” with the world, blissfully unaware that his “laying on of hands” trick involves, well, an emphasis on “laying.” At odds with a colorful party of fellow guests only too ready to swallow anything they’re told, Ted sets out to prove the miracles are a hoax and save the young man from a lifetime of embarrassment.

I was going to pass on this one based on the fact that I simply didn’t find the title appealing, but when I read it was an adaptation from a book written by Stephen Fry, I simply had to watch it.

I really enjoyed the film and the main character Ted Wallace played by Roger Allem is fantastic. As a foul mouthed, egotistical, pompous cynic he does an exceptional job. The rest of the cast is fair to good and though the its a fairly small number of characters, for the most part it works reasonably well. I would have liked to have read the book as I have a sneaking suspicion that this adaptation doesn’t do it justice, which of course would be entirely understandable.

Some of the characters, such as Madam Valerie and her daughter Clara, seem all to superfluous and present only in order to allow certain aspects of the plot to cone to fruition. As it stand their presence is thin and awkward, and highlights the lack of substance they have in the film. There are some issues with other characters but I’m nit picking so will leave it at that.

I found it an entertaining ‘whodunit’ quintessentially British with as contemporary a feel as can be mustered in a great house of the rural English countryside. The script is pretty good if a tad odd and overdone in places, but nothing too serious. The direction and screenplay are also on par and the whole thing fits together quite nicely really. There was some slight discomfort in the progression of events. The most noticeable being the very sudden transition from disparaging cynic to disparaging mystery solver. It was all a bit ‘Scooby Doo’ resolution and I can’t help but feel some essential material that would have ensured a more natural feel ended up on the cutting room floor. in fact to be totally honest I get the feeling quite a lot of this one ended up there. Still, all in all its very good and quite enjoyable.

I don’t think for a moment this film will be for everyone, but for what it is, it’s a pretty good piece. I definitely recommend it. 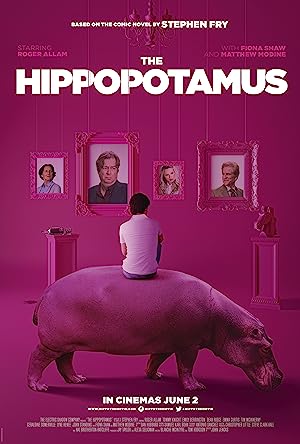 Be the first to review “The Hippopotamus 2017” Cancel reply