The Kindergarten Teacher 2014 with English Subtitles

A kindergarten teacher discovers in a five year-old child a prodigious gift for poetry. Amazed and inspired by this young boy, she decides to protect his talent in spite of everyone.

Although we felt it didn’t quite succeed, even on its own terms IMHO, “The Kindergarten Teacher” is still very watchable. The dour social criticism—poetry no longer has a place in the state of Israel!—didn’t really speak to us, though the satirical portraits of the PC haters in Nira’s poetry class and the weirdos at the poetry slam were quite amusing, in a depressing way.

The main storyline, Nira’s relationship with the chubby-cheeked prodigy, Yoav, gets your attention right away and really builds; our main complaint was that Yoav’s character seems inconsistent—he’s withdrawn and suspicious at first (and rightly so!), then suddenly turns trusting and confiding, without any real transition. (Maybe he just realizes he’s found a new amanuensis to copy down his poems; we, on the other hand, were sorry to see the last of Israeli singing star Ester Rada, who plays Yoav’s nanny, Miri.)

Another plausibility problem, at least judging by the subtitles, is that even the best read five-year-old could never have composed the poems he recites (“banality”? really?)… The plot line got a little too cryptic for our taste as well—there’s a teasing suggestion that Yoav’s poems were actually written by Miri, another that he’s channeling in verses recited by his uncle years before—and there are a couple of episodes meant to illustrate the, as it were, banality of Nira’s life that seem like filler, but writer/director Nadav Lapid pulls it all together in the almost wordless final scene, set in a glitzy Sinai resort, that really makes it clear what Nira’s nutty mission was all about. 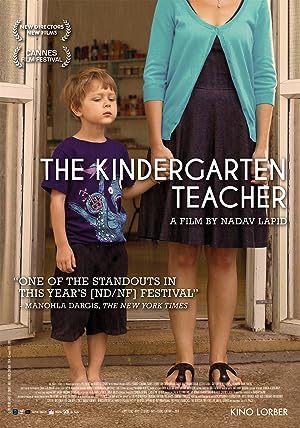