The Little Traitor 2007 with English Subtitles

A coming of age tale of the unlikely bond between a kindly British soldier and a spirited Jewish boy set against the backdrop of the birth of the State of Israel.

This story was told beautifully. it is like watching a truffaut film. It is one of those films that allow you to experience a moment in time. It is told simply and clearly with a wonderful performance by Alfred Molina. the young boys are at the same time earnest in their beliefs and headstrong in their rebellious strategy. The setting of Israel 1948 is very authentic and very aptly captures a time past. Seeing Jews, Arabs, Christians coexisting in daily life is a rarely seen way of life. It is important to see that this did and can exist. This aspect of the struggles prior to the formation of the state of Israel is very interesting and relevant , especially now. The Little Traitor captures both the energy and the sensitivity of the time. I think it is a movie that will appeal to a cross section of ages and backgrounds. I think that it is a rare film that can be enjoyed by a family together and will teach about history, hope and humanity. 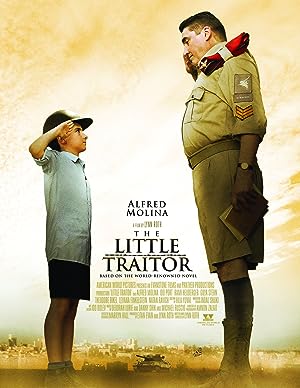