Home » Movies in English » The Loss of Sexual Innocence 1999

The Loss of Sexual Innocence 1999

Non-linear film tells the sexual story of a film director from his life at age 5, 12 and 16, a man embarking on his first film in 1950s Tunisia, and finally to his current life. Along the way, as a teen, he has sexual exploits with an older woman, gets involved with an Italian couple in Tunisia that culminates in the killing of a local boy and the brutal revenge murder of the woman and, ultimately, is married to a cold woman.

At what point do we lose our innocence? Is it the one moment of actually having sex, or is it a build up of smaller things through life that slowly take it away? This film has the effect of juxtaposing two views on the question: with Adam & Eve, we have complete innocence up to the moment of having sex ..then they are thrust out into the modern adult world and expected to somehow automatically know how to survive in it. The discovery of Sex does not give you the automatic knowledge of how to deal with all its possible consequences. Interweaved with that, Figgis puts scenes from a man’s developing life. Events shown that each eat away a little bit of innocence we may not have even realized we still have. The slow disintegration of Innocence through time. The effect of both instances is numbing. The most amazing scene for me involves two twins, unaware of each other’s existence (both played by Saffron Burrows), who one day cross paths with each other in an airport. The set up is stunning. This scene begs the question: if you met up with another version of yourself, a version with a different background & different formative events –would you even be recognizable to yourself? Would you be able to relate to that other you as a person? How much have the events in our lives formed us, and how much really is biological? The only quarrel with this film I have is a series of scenes in which Mr. Figgis employed a slow fade-in/fade-out method. This was very eye-painful to watch, the fade is at such a rate you feel as though you are just slow-blinking before falling asleep. Thankfully, this is only done briefly in the film. Over all, excellent filmmaking! 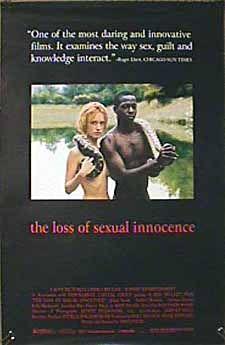 2 reviews for The Loss of Sexual Innocence 1999