A young boy from a working class family in post-war Germany struggles with his estranged father returning from war captivity, while a friend of his plays for the German National Soccer Team at the 1954 FIFA World Cup in Switzerland.

In the background it describes the post war Germany, the desperation, the aggression, the losses, the private and public devastation. Fantastic the scene when the train arrives in Essen and all the women anxiously hope that their husband or son will be on that train (many many of them were actually disappointed). Amazing how Soenke shows the game against Austria where he lets children play the actual game scenes on some muddy grass pitch, with the original radio comment running.

In the foreground it tells the story about those 90 minutes which many consider as the turning point for Germany in the 20th century. I was not existent yet but my mother and many others that I know of her generation can still tell what they did during these 90 minutes in 1954. The movie is brilliantly made, with real soccer players as actors (that shows at times, see “The school of rock”). The goals in the final actually happened the way they are shown in the movie. The American movie goers may not understand many of the little details (all the Herberger Phrases are there, Helmut Rahn actually had a severe alcohol problem later in life). They also may not realize the importance of soccer in all the rest of the world ? which cannot be overestimated. 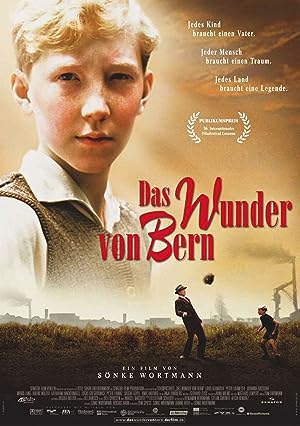