Bastian is a young boy who lives a dreary life being tormented by school bullies. On one such occasion he escapes into a book shop where the old proprieter reveals an ancient story-book to him, which he is warned can be dangerous. Shortly after, he “borrows” the book and begins to read it in the school attic where he is drawn into the mythical land of Fantasia, which desperately needs a hero to save it from destruction.

This is something special. “The NeverEnding Story” is a truly remarkable movie experience. A stunning and unique movie with this fantastic feeling and the feeling of being something “out-of-this-world”. The finest fantasy movie of all time. A timeless and nostalgic classic.

The rich production is notorious in so many ways: the gorgeous settings and landscapes/sceneries; the amazing special effects, visual effects and blue-screen effects; the magic; the spectacular combination of sounds, which impress even more if heard loud; the music…

Another major strength is the wonderful soundtrack, work of Giorgio Moroder and Klaus Doldinger, with that genial synthpop orientation. It’s so 80’s and I very much welcome that. The songs are all beautiful. Another great song is Limahl’s “Never Ending Story”, as well as the two lovely Tami Stronach’s singles “Fairy Queen” and “Riding on a Rainbow”. It’s impressing how she sings so well.

There are strange and fantastic creatures such as the Racing Snail, the creepy Gmork, Morla the ancient one, the friendly Rockbiter (a gentle giant), the Sleepy Bat and Falkor the luckdragon. I like Falkor very much: he’s so big, so cool, so fluffy, so cute and so friendly. He also has a great sense of humor and his dog-like appearance makes him irresistible.

Other interesting characters are the somewhat rude Nighthob, Teeny Weeny, the hilariously typically grumpy old man Mr. Koreander, the eccentric and amusing gnomes Engywook and Urgl, Cairon and especially Atreyu (and his horse Artax), Bastian and the Childlike Empress. Atreyu, Bastian and the Childlike Empress are all terrific kids. Atreyu is a different kind of hero: a true hero child, which is unusual and amazing. Bastian himself is another hero child.

The movie is promising since the very beginning, with those stunning, dazzling and colorful clouds, which bring it a magical touch. The beauty of the Ivory Tower palace, the golden of the Sphinxes and the blue of the Southern Oracle are also magical details about this movie, among many others. On the other hand, the storm called “The Nothing” is spectacular but slightly creepy. Nevertheless, it is another precious help to give magic and beauty to the film. Not to mention details like the sky full of stars and no clouds and when the sky has clouds…

It’s amazing how one gets involved into the story. While watching the movie, one can feel deeply involved in the story as much as Bastian does. It’s impossible to ignore it because it captures one’s attention and heart. Also, one can’t help but get deeply involved in Atreyu’s quest and everything he confronts to save Fantasia, including his emotions and despair.

The actors are all wonderful. Barret Oliver is amazing as the shy and imaginative Bastian, Noah Hathaway is awesome in the role of the young warrior Atreyu and Tami Stronach is terrific as the Childlike Empress. Her role is minor but very relevant and significant. She really looked like a little princess by portraying the Childlike Empress. It’s kinda surprising that this was her only movie role ever. Noah Hathaway… that long hair really fitted very well on him and his character Atreyu resembles an Indian, but only a little bit.

“The NeverEnding Story” is more than one of the greatest movies from the 80’s. It is one of the best, most beautiful, magical and distinguish movies ever. A fine movie with a very good message as well. I can positively say that Mr. Wolfgang Petersen knew what he was doing. This is his masterpiece.

The movie is a German production filmed in English with mostly American and English actors. The majority of the film takes place in Germany. And it was officially launched under its original title, “Die Unendliche Geschichte”, despite being filmed in English. By the way, I was born in 1984 and I’m very proud that this movie is from that year. After all, it’s a movie that I love.

This should definitely be on Top 250. 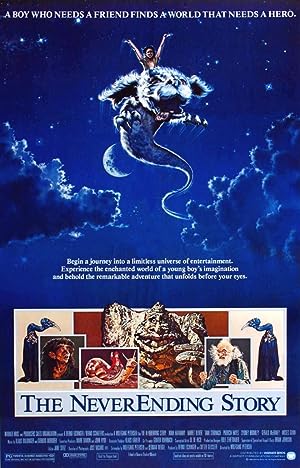 Be the first to review “The NeverEnding Story 1984” Cancel reply