Bastian’s dream to get a sibling becomes true when his father re-marries, but soon he has trouble with his new stepsister Nicole and with a gang of school bullies, the Nasties. Hiding in the school library, Bastian finds his favorite book of THE NEVERENDING STORY, where it is later found by Slip, the gang leader. The latter recognizes the power of the book and begins to form Fantasia after his bad intentions. When the chaos becomes worse the Child-like Empress requests Bastian to move back to the real world, get the book back and save Fantasia. Accidentally some Fantasia characters travel with him to reality, but get lost in different places. Meanwhile Slip and the other Nasties spread anarchy. Finally, Bastian gets support from Nicole, who begins to believe in the power of Fantasia.

We have seen all the NES movies. The 1st was the absolute best!!!!! The second was sub-par. The third was the worst of them all!!!!!!!!!!!!!!! Good News: Jack Black Played his character very well. Bad News: Where do we begin? First of all No atreau- Why, we don’t know. second, the empress had BLOND hair. Defenatly not the beautiful girl in the first NES.She also looked very stoned. Bastion was an innocent kid with a big imagination. This one looked clueless. Changing his dead mother to his dead father is the worse, most noticeably fault with the story. YOU DO NOT CHANGE THE THE ORIGINAL POINTS OF THE FRANCHISE!!!! Now the fantasia characters. Falcor looked like an anorexic, crack head who must of lost all his knowledge with the pipe. We loved the rock-biter in the first film. But in this he shrunk and had a family (yes we know his son was in the second). If everyone grew up, why didn’t didn’t the baby? The elves looked horrible. It was good they brought them back, but they ruined the concept of them both. The oracle looked nothing like the first film and neither did the ivory tower.(stone?) They shouldn’t started from scratch. The idea of using the real world as a premise was good, but the storyline sucked bad. Only Falcor new what the real world looked like. To try to make us believe that the other fantasia characters knew was laughable to say the least.

Over all they should burn all copies of this movie and use a memory wipe to make us forget this movie ever existed. If we rated this on a scale of 1-10 we would give this a -1000. 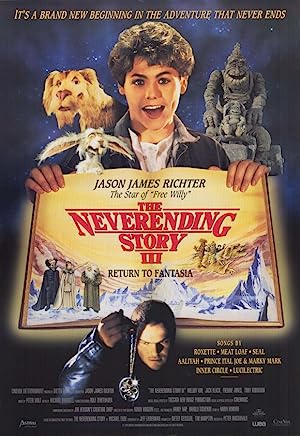