Nineteen-year-old Jason and Ade have been in the Academy of a famous London football club since they were eight years old. It’s the night before their first-ever game for the first team – a Champions League match – and they’re in a hotel room in Romania. They should be sleeping, but they’re over-excited. They skip, fight, mock each other, prepare their kit, watch a teammate’s sex tape. And then, out of nowhere, one of them kisses the other. The impact of this ‘pass’ reverberates through the next ten years of their lives – a decade of fame and failure, secrets and lies, in a sporting world where image is everything.

I’ve just watched “The Pass”. It was much more rewarding than two other reviews on this site might suggest. I think that they were deliberately posted by homophobes in order to diminish the attractiveness of this movie. To confirm my view, I’d just suggest that you consider the “External Reviews” on this site. All of the English reviews are overwhelmingly positive, which makes me think that there are some people out there who try, very deliberately, to denigrate or otherwise diminish the quality of any gay themed movies.

Now, to the movie itself. It’s a tale of two young footballers, one black and the other white. While they feel a certain attraction to one and other, it is only in their later lives that they are able to come to terms with it. I think it to be a really good movie with interesting messages.

Just how beautiful is “The Beautiful Game”? Only you can determine that. But I thought this to be a good and thoughtful movie. Russell Tovey was believable, handsome, beautiful and excellent in his role, as was his counter-part, Arinzé Kene. Two good-looking men. They are just surprised when they are attracted to one and other.

I give the movie 8/10 for its honesty in examining relationships between men. It’s a subject which is not often covered in the movies.

If you choose to watch it, then I trust that you will enjoy it. 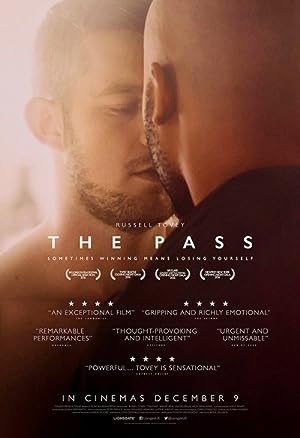 The Pass (2016)
88 min|Drama, Romance|08 May 2018
6.4Rating: 6.4 / 10 from 2,689 users
A romantic interaction between two young footballers profoundly affects one of them throughout the rest of his life and career.
Director: Ben A. Williams
Creator: John Donnelly
Actors: Russell Tovey, Arinzé Kene, Lisa McGrillis, Nico Mirallegro

Be the first to review “The Pass 2016” Cancel reply