Home » Movies in English » The Perks of Being a Wallflower 2012

The Perks of Being a Wallflower 2012

Based on the novel written by Stephen Chbosky, this is about 15-year-old Charlie (Logan Lerman), an endearing and naive outsider, coping with first love (Emma Watson), the suicide of his best friend, and his own mental illness while struggling to find a group of people with whom he belongs. The introvert freshman is taken under the wings of two seniors, Sam and Patrick, who welcome him to the real world.

Motion Picture Rating (MPAA)
Rated PG-13 on appeal for mature thematic material, drug and alcohol use, sexual content including references, and a fight – all involving teens

Saw this movie at TIFF and after watching the trailer was thinking I was going to enjoy this movie. Those expectations now are so very low, this movie is amazing. It speaks on many different levels of being a teenager, dealing with death, loneliness, and how awkward it can be trying to fit in. I haven’t seen a move like this in a very long time and was very refreshing. The highlight of the film for me at least from a acting stand point is Ezra Miller really funny, but very heartfelt at the same time. Don’t get me wrong the whole case is amazing (Emma Watson was perfect for this after HP) but Ezra really stands out. Stephen Chbosky really cared about this book, and it really shows in this film. Him Directing and writing his own book was a amazing idea.

It’s going to get many comparisons to a John Hughes film, and rightfully so this movie is heart felt and just amazing.

I will definitely being seeing this film again. 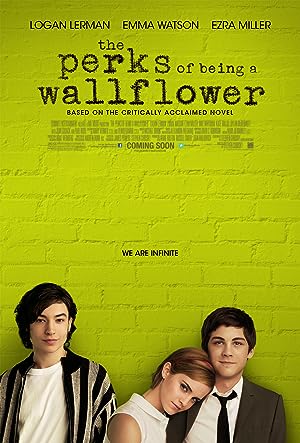 The Perks of Being a Wallflower (2012)
103 min|Drama, Romance|12 Oct 2012
8.0Rating: 8.0 / 10 from 420,296 users
An introvert freshman is taken under the wings of two seniors who welcome him to the real world.
Director: Stephen Chbosky
Creator: Stephen Chbosky (screenplay by), Stephen Chbosky (based on his book)
Actors: Logan Lerman, Dylan McDermott, Kate Walsh, Patrick de Ledebur