As a young girl in Japan, Nagiko’s father paints characters on her face, and her aunt reads to her from “The Pillow Book”, the diary of a 10th-century lady-in-waiting. Nagiko grows up, obsessed with books, papers, and writing on bodies, and her sexual odyssey (and the creation of her own Pillow Book) is a “parfait mélange” of classical Japanese, modern Chinese, and Western film images.

“Pillowbook” maybe one of Peter Greenaway’s most amazing films next to “The Cook, the Thief, his Wife and her Lover”. If you want to see Ewan McGregor completely naked for extended periods of time, now’s your chance. I’d probably walk around nude too, if I was as well endowed as him! The “Pillowbook” concerns the character Nagiko, played by the sexy Vivian Wu. (She made me say Woooh!) Growing up Nagiko has fond memories of her father who was an author. He would paint calligraphy on her face. She also enjoyed the pillow-book that her aunt had read to her with it’s sensual stories. One memory that troubles her was her father being blackmailed for sexual favors by a gay publisher. He did this to get his stories published. All grown up Nagiko develops a fetish to be written on with ink. She goes through many men, but has no luck. She also has the desire to create her own pillow-book of lists and obsessions. Then she meets Jerome (Ewan Mcgregor) an English translator, it’s a strange love at first sight. The only problem is that he has sloppy handwriting. So Jerome offer’s himself to be written on like the pages of the book. Little does she know that Jerome is bisexual and having relations with the same publisher that had blackmailed her father growing up. When she realizes this she uses Jerome to seduce the publisher with his written body. She wants to get her book published. Nagiko narrates the film saying, “If I couldn’t seduce the publisher, I could at least seduce the publisher’s lover.” Talk about twisted! As the film moves along it becomes more strange and surreal, with frame within frame of words and images. The screen breaks down into boxes and into lists at points. It’s easy to get confused during your first viewing, like Greenaway’s other films. “The Pillowbook” is not your typical erotic film, it’s also a story of betrayal and vengeance. One things for sure, Vivian Wu and Ewan McGregor have such great sexual chemistry together. This creates a hypnotic and beautiful effect on the viewer. 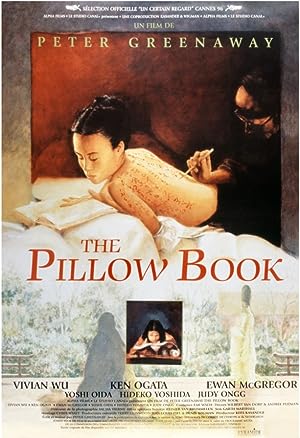