Twelve year-old Jamie Benjamin is a misunderstood lad. His classmates pick on him, his neighbors think he’s weird and his parents ignore him. But now Jamie has a secret weapon: deep in the woods he has discovered a deep pit full of man-eating creatures he calls Trogs… and it isn’t long before he gets an idea for getting revenge and feeding the Trogs in the process!

Why the plot outline says the boy here was autistic is beyond me. A bit strange and maybe a little introverted, but he just was not autistic. This movie is about a rather unique boy who has conversations with his teddy bear. This is really one of the more stranger aspects of this movie. You are led to believe he is just having imaginary conversations with the bear, but in one scene the teddy actually turns its head. This aspect of the film is never explained in any kind of detail. For the most part it is about the boy having a crush on a woman. This boy also has a rather dark secret. He knows of a pit of monsters near where he lives and he feeds these monsters. What does he feed them you ask? Why people that tick him off of course. It is rather funny seeing him find ways to feed the monsters the best being the football scene. After awhile though the kid actually frees the monsters from the pit where they then go on a rampage. A good movie as long as you don’t take it to seriously and the ending is good too. 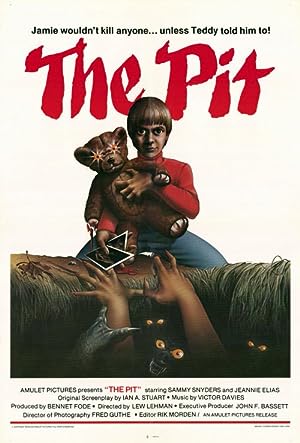 Be the first to review “The Pit 1981” Cancel reply