Home » Non-English with Subtitles » The Return 2003 with English Subtitles

The Return 2003 with English Subtitles

The events of the film unfold over six days and tell about the mysterious journey of a strange man and his two teenage sons who had never seen him before. Vanya and Andrey, for how long they remember, lived with their mother, who once told them that their father was a pilot. But one ordinary Monday, dad appears in their house and takes the brothers on a hike to a small island in the middle of a forest lake.

It amazing how many people have written comments about this movie, and surprising how lengthy their reviews are. Huge Hollywood blockbusters don’t generate this kind of passion.

I don’t know why this movie works so well, but it does. After the opening scenes, I was a bit concerned it might turn out to be a plodding, slow-paced film, but the plot keeps gathering steam and captures your interest. In this sense, it reminds me of Donna Tartt’s brilliant book, “A Secret History”, whose the plot is difficult to describe in terms that sound interesting or exciting, but believe me, it’s a book that keeps you awake at night because you can’t bear to put it down and wait another day to find out what happens next.

The movie’s genius is in the way it keeps you guessing about the real identity of the father. It this man really their father? Is he planning to help them? Is he sincerely trying to get to know them, or is he a cold-hearted thug who plans on killing them once they are no longer of any use to him? When the movie ends, you can’t be absolutely sure.

Just like “All About Eve” (Bette Davis), this movie has a rare sophistication. The characters might feel love and hate towards someone at the same time. In “The Return”, the emotional complexity of the father/son relationship grabs your interest, then couples this with the mystery surrounding the father and his intentions.

If you avoid foreign films because you think they are slow and boring (and in truth, many of them in the 1970s and 1980s were boring), this one will pleasantly surprise you. It’s certainly not some “action flick”, but you won’t be bored; you’ll be transfixed. 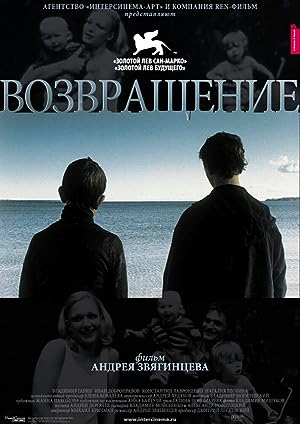