Home » Non-English with Subtitles » The Student 2016 with English Subtitles

The Student 2016 with English Subtitles

After Venya’s mother receives a call from school reporting her son’s refusal to participate in mixed swimming lessons, she first suspects her teenager of being shy and derides his claim that it is “against his religion.” As Venya is finally exempted by the school’s devout principal, he grows confident that his strict and rigorous study of the Bible gives him the ability to manipulate all forms of authority. Challenged by a teacher who refuses to consent to his dogma, he sets out to eliminate her and subdue an entire community. At a time when arguments over the teaching of religion in public schools are prominent in the media, this wildly escalating classroom drama – based on a play by German playwright Marius von Mayenburg – serves as a frightening cautionary tale.

“The Student” – “(M)uchenik” directed by Kirill Serebrennikov is an attempt to reconsider religious fanaticism in the modern world. The picture is based on the play “Martyr” by German author Marius von Mayenburg and it was adapted to the reality of modern Russia.

In a way the problems touched upon in the film are universal and not connected to one particular religion. An interesting aspect of the film is the constant quoting of the Bible which shows that any religion can become an instrument of aggression. The picture is a sharp and humorous satire. The teachers in the film are very well depicted, they whose heads are full of self contradictory ideas combining Stalinism, Putinism, Communism, Liberalism and religion. The school administration cannot confront a religious fanatic because they themselves do not have any ideas or principles.

When the biology teacher tries to confront Veniamin, she also looks into the Bible, which she interprets in a vulgar and primitive way. The relations between Veniamin and Grigori are interesting; he becomes very close to Veniamin but we see later that Grigori is gay which is the real reason why he becomes his disciple.

The film is shot in a minimalistic way in this low-budget production, but the actors play well and the dialogues are very funny. The ideas of the picture are important, the film has an open end just as our society has an uncertain future with growing extremism and radicalism. 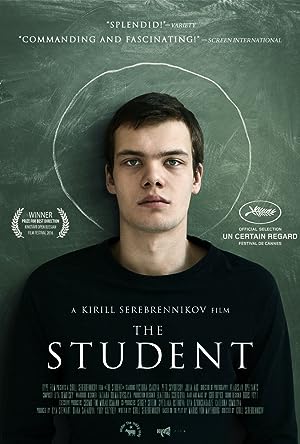 2 reviews for The Student 2016 with English Subtitles