Two men are in a fishing boat talking. One feels more than one sees that the seawater around them is warm and smooth, teeming with brightly-colored fish. By night, the rubber plantation also comes across as enticing and full of secrets, until lurid reminders of the bloody massacre flash up. This film arose from of a state of shock – about the news, about the subsequent repression in the authoritarian kingdom but also about the debilitating passivity that followed the pro-democracy Red Shirt uprising. It is a radical personal assessment in 17 episodes. An angry protest in the form of a diary, where sexual resistance and erotic fantasies are juxtaposed with thoughtful rummaging through the director’s family album, creating a confusing pamphlet. As a young boy in the 1970s, Thunska was already forced to flee Bangkok for the south with his mother.

It’s probably not necessary to review this, as it’s only been in the International Forum at Berlinale this year and your chances of having heard about it are slim. But on reminiscing on all the bad films I’ve seen on the festival circuit this year, this one easily comes up on top and therefore merits some warning.

What makes this so terrible is less the amateur direction and lack of coherence or background information, but willful distortion of facts mingled with the distinct impression that the filmmakers are not really concerned with the unrest they’ve seen, but rather try to cash in on it. The stills amply used are actually from the Chinese Cultural Revolution (including a very famous shot of a man hanged with barbed wire while Red Guards force a shoe down his throat); it is implied here that these were actions of the Thai military against communist rebels. Thus pictures of communist violence are being presented as pictures of violence against communists – therefore ‘Terrorists’ cannot be interpreted as a documentary even in the most generous terms. The idea was probably: ‘If Weerasethikul could use stills of rebels in ‘Uncle Boonmee’, why can’t I?’ Only that those shots were actually real.

In the panel discussion, the director refused to elaborate what the conflict in Thailand was about, claiming that he would not do the (meanwhile defunct) government the honor of explaining who they are. This deepened my suspicion that he was faking his interest in the issue, for if someone makes a film about the situation in his country and gets the chance to present it to a festival audience, it would be logical to explain the situation to people interested in it. 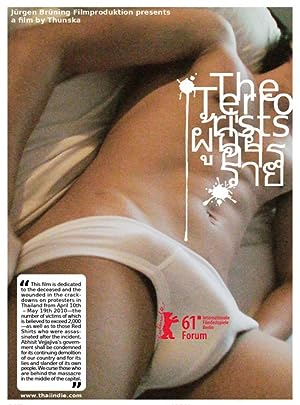