Home » Non-English with Subtitles » The Warning 2018 with English Subtitles

The Warning 2018 with English Subtitles

In April 2, 2008, Jon is a 32 years old mathematician who witnesses as his best friend David is shot in a gas station outside Madrid. In April 2, 2018, Nico is a 10 years old boy who suffers bullying from a school partners, who forces him to enter in the same gas station to buy a magazine for adults. Saved in the last minute by his mother Lucía of the bullies after she arrives looking for her son, Nico buys a video-game magazine, finding in it a note about that if he goes to the gas station on April 12 he will die. Meanwhile fear and paranoia starts to dominate Nico, Jon notices about a previous shot happened in 1976, where the chauffeur of a general too was shot to dead in the same gas station. Deeping in the past of the place, Jon finds similar tragedies in 1955 and 1913 and he tries use his talent for the mathematics to find a pattern in the incidents, causing the rejection of Andrea, David’s girlfriend and Jon’s former girlfriend. According April 12 closes, Lucía struggles to erase the progressive fear of Nico to be killed, and Jon struggles against his each more unbalanced mind after to leave the treatment for the schizophrenia he suffers. Trying to confirm his discoveries to Andrea after to find the relation that connects all events, Jon starts a race against time thinking that it will repeats again in 2018, looking for a way to prevent it. But is it real, or only a trick of his fragile mind? Will can Jon break the circle before it be too late?

I enjoyed this title, the cinematography is excellent, the story is thrilling with a good number of twists, the actors are believable -Raúl Arévalo’s role is intense and balance-, the music choice is perfect for the atmosphere the plot wants to create. On the negative side, I would say the story is not the most original but that is not a reason not to enjoy the film.

I recommend this film to those looking for an atmospheric thriller with a hint of magic realism. 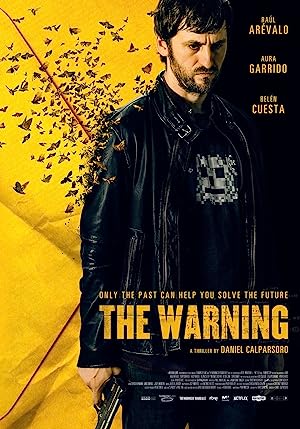 The Warning (2018)
92 min|Crime, Drama, Fantasy, Mystery, Thriller|23 Mar 2018
5.9Rating: 5.9 / 10 from 3,456 users
Ten-year-old Nico receives a threatening letter and now his life is in danger. No one seems to believe him except one person that he doesn't know who has come to believe that fate itself wants the boy dead and tries to prevent it.
Director: Daniel Calparsoro
Creator: Patxi Amezcua (adaptation), Chris Sparling (screenplay by), Jorge Guerricaechevarría (based on the screenplay by), Paul Pen (based on El Aviso by)
Actors: Raúl Arévalo, Aura Garrido, Hugo Arbues, Belén Cuesta