Duncan (Liam James) is not a popular kid and it doesn’t look like the summer is going to offer anything better for him. His mother’s boyfriend has invited them to his beach house where Duncan is expected to improve his personality and physical appearance, and meet girls. But his would-be step-sister doesn’t want anything to do with him and his shy demeanor makes it difficult for him to meet anybody new. When Duncan wanders into the Water Wizz, the local water park, he meets adult employees who are just having fun. Owen (Sam Rockwell) lets Duncan work with him and their new-found bond will help each other mature and find their place in life. Which for Duncan means standing up to his would-be step-father, having a conversation with the girl next door and being more comfortable with who he is.

Having seen a run of fairly forgettable blockbusters it was nice to go along and watch a low budget movie.

The way way back is a coming of age movie and follows shy Duncan on his summer vacation with mother and step dad. I’m sure the relationship between Duncan and parents will be familiar to many people. The good thing about this type of movie is that it focuses more on characters and you get a real sense, feel and empathy for several characters. The cast is strong and in addition to the lead played by Liam James you have the likes of Steve Carell, Toni Collette and Sam Rockwell.

The movie does occasionally get a little too “feel good”, but that’s a small drawback in what is otherwise a very enjoyable watch. Well worth a watch if you like off beat indie dramas. 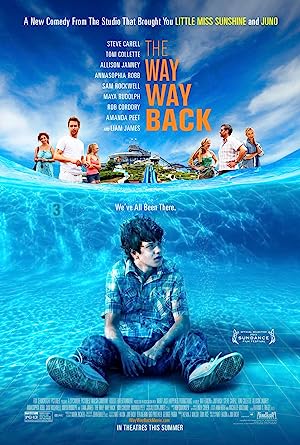