Xolani, a lonely factory worker, travels to the rural mountains with the men of his community to initiate a group of teenage boys into manhood. When a defiant initiate from the city discovers his best-kept secret, Xolani’s entire existence begins to unravel.

This film has caused controversy in South Africa because of the secrecy surrounding initiation, and it will be viewed by Xhosa very much as a hostile white man’s view of the practice. There is little about the cutting (nothing is shown) but much about homophobia and bullying. It is clear that the filmmakers think (as I do) the idea that initiation makes boys into men is hollow.

It’s a slow-burning drama with three central characters, Xolani (“X”) a caregiver to a single initiate, Kwanda, among a group of about 10, three of whom are cared for by Vija. X has sex annually at the initiations with Vija, who is married (shades of Brokeback Mountain), but their relationship is ambiguous. Kwanda’s sexuality is unclear, but coming from Johannesburg, he is more urbane than the others, and suspect for that reason. He is called a “faggot” but more as a general-purpose insult.

The initiates are all cut early on in the film; there is mention of painful herbs being applied, and infections, but not the significant risk of death. Near the end, Kwanda, who has said very little, dismisses the importance of the genital cutting (without actually denouncing it). The irony is that he _has_ matured from his experience on the mountain, but not in the way the traditionalists imagine. Another irony is that X seems to have learnt from his pupil.

What the film very much brings out is the urban-rural, traditional-modern tension in South Africa, though the setting is entirely traditional. I recommend it to urban people for a glimpse into a very different culture – that yet throws light on our own. 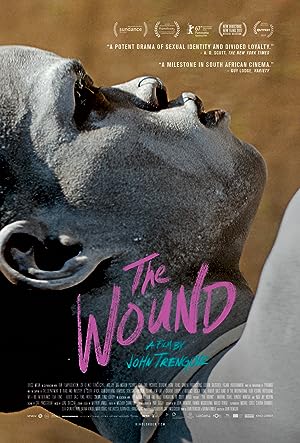 Be the first to review “The Wound 2017” Cancel reply