Home » Movies in English » The Young and Prodigious T.S. Spivet 2013

The Young and Prodigious T.S. Spivet 2013

T.S. Spivet lives on a ranch in Montana with his mother who is obsessed with the morphology of beetles, his father (a cowboy born a hundred years too late) and his 14 year-old sister who dreams of becoming Miss America. T.S. is a 10 year-old prodigy with a passion for cartography and scientific inventions. One day, he receives an unexpected call from the Smithsonian museum telling him that he is the winner of the very prestigious Baird prize for his discovery of the perpetual motion machine and that he is invited to a reception in his honor where he is expected to give a speech. Without telling anyone, he sets out on a freight train across the U.S.A. to reach Washington DC. There is also Layton, twin brother of T.S., who died in an accident involving a firearm in the family’s barn, which no one ever speaks of. T.S. was with him, measuring the scale of the gunshots for an experiment, and he doesn’t understand what happened.

Even seasoned reviewers will tell you, in confidence, that there are some films which should not be reviewed by conventional means. This is one of them.

I am guessing I have seen several dozen films that try in their own fashion to capture the essence, the nub, of what it is like to be a child in a world of adults.

This one succeeds and does so brilliantly.

It is not merely that writer/director Jean-Pierre Jeunet is a craftsman of the highest order – I would happily stand in line to see his next film, whatever it may be — or that the actors (including Helena Carter) are pitch perfect, it is the sum total of the experience that just grabs you from the first scene and holds you until the end. 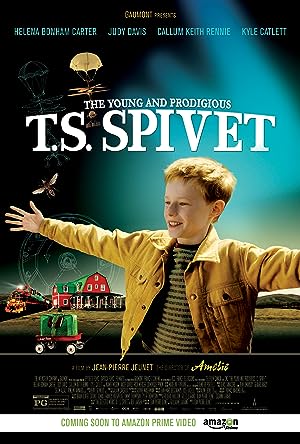 Be the first to review “The Young and Prodigious T.S. Spivet 2013” Cancel reply