For generations, there have been all kinds of wild rumors surrounding gangster Al Capone’s hidden fortune and the mysterious amusement park he built. When three kids sneak into the rundown park on the hunt for Capone’s loot, the attractions come to life and take the kids on a wild and dangerous ride beyond all imagination. Now to survive the night, they must team up with a friendly sea witch, find a secret underground ride and take on an evil mermaid, bloodthirsty pirates, a fire-breathing dragon and an armada of monsters. And all on a school night!

Parents need to know that Thrill Ride is an adventure story about three kids looking for one of Al Capone’s many rumored hidden stashes of money and treasure. Fantasy violence includes fighting with magical abilities. There’s some scariness from long, dark tunnels; a mummy, a witch, a vampire, and a zombie are brought to life, and animatronic bears come to life and attack the kids. “Damn” is used a couple of times, but the rest of the iffy language involves potty humor like “crap,” “poop,” and “buttload.” There’s one kiss on the lips between two kids, and mentions of skinny-dipping, nudity, and that sexual reproduction results in birth. Gross-out humor includes farting and eating live goldfish. The kids’ mother passed away from an illness 18 months ago. 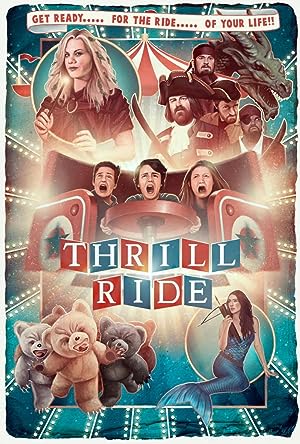 Be the first to review “Thrill Ride 2016” Cancel reply