Time of the Wolf 2003 with English Subtitles

In an undefined time, the environment has been totally destroyed and now the water is contaminated and the animals have been burned. Georges Laurent travels with her wife Anne Laurent, their teenage daughter Eva and their son Ben from the city to their cabin in the countryside. On the arrival, they find that intruders have broken in the house, and one stranger kills George. Anne, Eva and Ben wander through the village asking for shelter and supplies for their acquaintances, but they refuse to help them. They reach an abandoned barn and spend the night inside. On the next morning, they meet a teenage boy and they walk together to a train station, where they find other survivors. Together, they wait for the train expecting to go to a better place in the middle of the chaos.

A French woman (Isabelle Huppert) and her two young children struggle for survival shortly after an unidentified apocalypse. This is a very different sort of post-apocalyptic film–it is very minimalist and dramatic. The most fascinating aspect is that whatever happened to the world is never explained or even discussed by the characters. The only thing they know is that uncontaminated water is scarce and personal belongings are very valuable. They are living in the present, fighting for survival. The characters are often devoid of extreme emotion during the crises they face in the film, so the viewer assumes that whatever happened that changed the world must have been graphic and brutal.

Haneke is an exceptional filmmaker and has quite an eye. The combination of lingering camera-work and lack of score create an uneasy tension. Some might argue that the movie is boring because there isn’t much action, but I thought it was visually stunning. The movie attempts to be about post-apocalypse social struggle and power–including conflict between different nationalities and genders–but it could have been more successful in doing this. The acting is outstanding (especially by Huppert and the actress that plays her daughter). Even though she gets co-billing, Beatrice Dalle is only in the film for a bit, but she does have a “Betty Blue”-style freak-out. I recommend this to anyone who likes post-apocalypse movies and is interested in seeing a hauntingly realistic one. 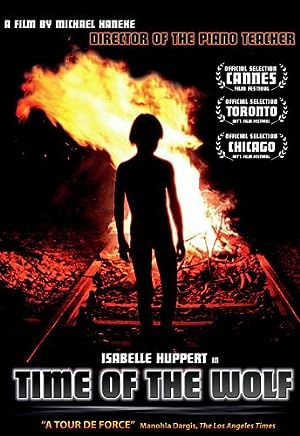 Time of the Wolf (2003)
114 min|Drama, Horror|08 Oct 2003
6.6Rating: 6.6 / 10 from 8,762 users
When Anna and her family arrive at their holiday home, they find it occupied by strangers. This confrontation is just the beginning of a painful learning process.
Director: Michael Haneke
Creator: Michael Haneke
Actors: Isabelle Huppert, Béatrice Dalle, Patrice Chéreau, Rona Hartner

1 review for Time of the Wolf 2003 with English Subtitles