Wolverhampton,1967: nine year old Nigel Slater loves his mother though she is a hopeless cook, her finest offering being toast whilst he has great culinary aspirations. When she dies of asthma Nigel is left with a distant father but worse is to come when the ‘common’ Mrs. Joan Potter arrives as the Slaters’ cleaner. Nigel fears, rightly, that her aim is to be the next Mrs. Slater and soon he has a new stepmother and is whisked away to the country. Joan is, however, a superb cook but this only makes for rivalry as Nigel, the only boy in his cookery class at secondary school, competes with her to find the way to his father’s heart. A weekend job in a pub kitchen introduces Nigel to an older boy, another great cook and gay like himself, who gives him the confidence and inspiration to leave home after his father’s death and head for the hotel kitchens of London.

The British always seem to have such interesting faces, and because of that their movies seems to have more depth and feeling than American movies. Toast is no exception. This movie contains little dialogue and relies much on visual communication, which could easily have turned it into one of those movies that makes you glance at your watch every twenty minutes. But the casting of such physically unique individuals makes it riveting.

The dynamics of family. I know, I know. Do we really need to go there again? Yes we do, and Toast puts it out there in a raw, you-are-scarred-for-life way that we can all relate to. It hurts to watch the way Nigel Carter, the British food writer on whose biography the movie is based, hurl insults at his dying mother, knowing this behavior will haunt him in the end. It’s equally hard to watch the miscommunication between father and son—this could be any home in America where parents and children seem to speaking foreign tongues to each other, tearing the already weakened fabric of parent-child relationships. It’s a wonder anyone survives.

But Nigel was a survivor. I liked how he listened to the voice inside him, ignoring society’s pressure to fit in. In school he was the only male who chose to take home economics over shop, and he stood at his father’s wedding by the cake he’d made so carefully, even though the wedding represented everything that would alienate him even further from his father. Our Nigel did it his way. I half-expected to to hear that Frank Sinatra song at some point during the film.

I loved the reference to toast. “Soft inside the toasted shell, where the butter nestles in…” or something like that. I loved toast when I was growing up, and I think it is the only comfort food that doesn’t have a sugar base. My personal favorite was cinnamon toast, but hey, to each his own. I have never met anyone who doesn’t like toast, and it was a perfect metaphor.

Which leads us to wonder, is it possible Nigel’s mother was that bad a cook? Is it possible that someone could boil cans for dinner and burn them? Go see Toast. Then cook something. Feed those you love with culinary delights you enjoy making and let the sweet and savory fetes roll. 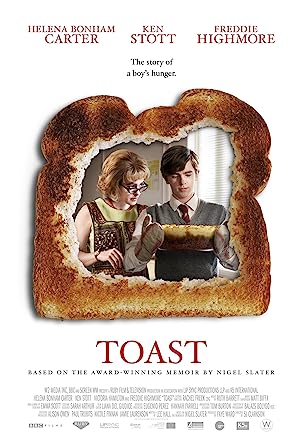