Tony Award-winning actor and playwright Harvey Fierstein re-creates his role as the unsinkable Arnold Beckoff in this film adaptation of the smash Broadway play TORCH SONG TRILOGY. A very personal story that is both funny and poignant, TORCH SONG TRILOGY chronicles a New Yorker’s search for love, respect and tradition in a world that seems not especially made for him. From Arnold’s hilarious steps toward domestic bliss with a reluctant school teacher, to his first truly promising love affair with a young fashion model, Arnold’s greatest challenge remains his complicated relationship with his mother. But armed with a keenly developed sense of humor and oftentimes piercing wit, Arnold continues to test the commonly accepted terms of endearment–and endurance–in a universally affecting story that confirms that happiness is well worth carrying a torch for.

I was fortunate enough to see one of the 1222 performances of Torch Song Trilogy when it was on Broadway, a show written and starring Harvey Fierstein who with this success becomes a Brooklyn Jewish version of Noel Coward. Sad to say Torch Song Trilogy was tragically dated when it got to the screen because the AIDS epidemic had not occurred when Fierstein wrote this bittersweet tale of a gay life, and a man who refuses to conform to anyone else’s ideas including his all powerful Jewish mother. And we know how formidable those folks can be.

Fierstein is Arnold Beckoff who knew from early childhood he was a gay kid and took life as it came. In fact he became a drag entertainer of note and seems to be doing quite well at it, making a living, much to the consternation of his mother Anne Bancroft. I saw Estelle Getty do this on Broadway and I wouldn’t want to split hairs on the differences between the two actresses. Like so many of her generation, Bancroft just thinks being gay is a phase that her son will grow out of. Of course by his mid thirties you’d think she would have a clue. As on Broadway the scenes between Mrs. Beckoff and her son have the real meat of the play.

As you might have guessed Torch Song Trilogy had its beginnings in the gay cabaret scene and through the persistence of Harvey Fierstein it got to Broadway. On stage the various scenes which are more segmented than in the film version are punctuated by a cabaret singers doing various torch song ballads to put a coda on what the audience had just seen. Here the torch songs are relegated to background music, the best kind of background music to be sure. Harvey himself however does perform in his drag character.

The one true love of his life is Brian Kerwin who can’t quite accept himself as gay. He’s comfortable being ‘bisexual’, but as Fierstein so accurately points out, he’d like to meet just one bisexual who is open with his boyfriends, but keeps his women a big old secret.

Kerwin is always an interesting player to watch. He got his first notice as the hayseed deputy on the Sheriff Lobo series and he’s spent the rest of his career making sure he was NEVER cast in that kind of part again. As the troubled love of Harvey’s life, Kerwin certainly proves he’s more than a hayseed. Because Kerwin won’t be true to himself, Harvey looks for love elsewhere. Harvey’s not capable of closeted behavior, the closet would be death for him.

Matthew Broderick plays Alan the young male model who Harvey falls for and he’s as winning here as he is in Ferris Bueller’s Day Off. In fact he’s a gay Ferris Bueller who probably did spend time trying to get into adult gay clubs and knew all the places where they’d wink and let him in. His tragic end at the hands of a gang of homophobic street thugs is something I saw all too much of in my working life at Crime Victims Board.

Torch Song Trilogy transfers quite well from the stage to the screen and with Harvey Fierstein helping with the transfer, we’d expect nothing less. He kept the film true to the vision of gay male life that he saw and lived. I still remember he and I were both witnesses at the gay rights hearings in New York City back when Torch Song Trilogy had just finished its Broadway run. His words there were among the most inspiring.

So this review is dedicated to the author and star of Torch Song Trilogy who has never slackened in his dedication for Gay/Lesbian/Bisexual/Transgender Rights and gives of himself and his talents to his people. From your fellow Brooklynite Harvey, with love. 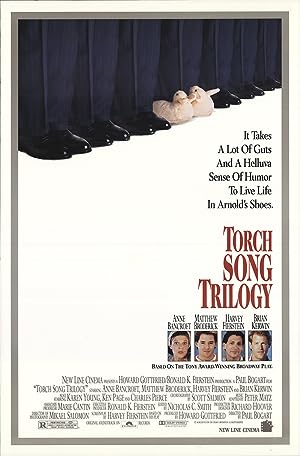