A man is out to kill a person he swore on his best friend’s death bed to protect. CHRIS JENSEN is torn between his allegiance to his fallen friend, TYLER TOWNSEND, who died in Afghanistan and Tyler’s half sister who hires Chris to kill her late brother’s gay lover. The lover, ANDREW WARNER, stands to inherit half of the families multi- million dollar company left to him by Tyler. Tyler’s half sister JACKIE TONWSEND has other plans for the young and unassuming Andrew. All goes to plan even though Chris has fallen in love with the young Andrew. Andrew grows suspicious, the plan is reveled and it’s every man and woman for themselves. A fortune will go to the last one standing.

This is a low budget movie that is every bit second class as it can be, but it has a first class twist to the plot. It surprised me and changed my mind a little on this movie. Here’s the set-up – rich bitch hires homeless ex-army dude to snuff out her now dead half brother’s boyfriend. Why, because half brother left large inheritance to boyfriend and she wants it back.

You’ll know what happens early on in the movie – ex-army dude falls for dead half brothers boyfriend (the guy he’s suppose to snuff out). So if you decide to catch this cheap flick and you want to see a lot of California scenery and two hot dudes in bed getting it on, start from the beginning.

But if you want to see the good part of this flick skip the first hour and watch the last 30 or so minutes. Believe me you’ll know exactly whats going on and you’ll see the plot twist and understand it too. I never heard of Jack Brockett, or Sean Paul Lockhart and which is which I don’t know but one of them did some fairly decent acting – considering this grade B movie!! 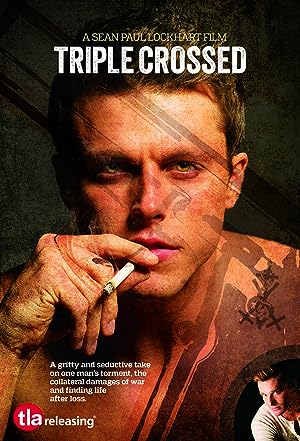 Be the first to review “Triple Crossed 2013” Cancel reply