The films tells the story of three friends living in the Bronx in New York – Juan Jose a.k.a. J.J., Joey and Louie. The first half of the film tells of them when they were children, and second is set 15 years later, when they have much more serious problems.

I remember watching this movie in parts, on TV, as a kid, and there are two scenes which stayed in my memory all these years. The first is when they bunk school to go fishing, and they get caught the next day when their photo appears in the newspaper. The other scene is when towards the end, Joey tells his wife, Gina, “I cant move my legs”.

Now, having seen the movie in full after so many years, I enjoyed and appreciate it even more. A beautiful story of 3 friends growing up in a rough neighborhood, and sticking together in the toughest of times, this movie starts with some nice and light moments, and ends with some tearful moments towards the end. It depicts the ups and downs of life, and reminds us to value our true friends, and their friendship. It also shows how true friendship lives on even after a friend might not be there anymore.

For me the best thing about the movie is the story, and the bonding the 3 lead actors (and their junior versions) share. The way the friends come together to help J.J, or when they take Louie out for some “fun” on his birthday, are scenes that we can relate to in some way or another in our own lives. And the tragedy with Joey in the end makes you feel that you have lost a friend too.

The drawback of the movie may very possibly be some technical factors like poor editing which make the movie progress at a hurried pace, especially initially. A film like this might have done better with a few more slower moments in my opinion.

Overall, the movie aims at celebrating true friendship, and even despite a tragedy in the end, it somehow ends up on a positive note. A must watch in my opinion. 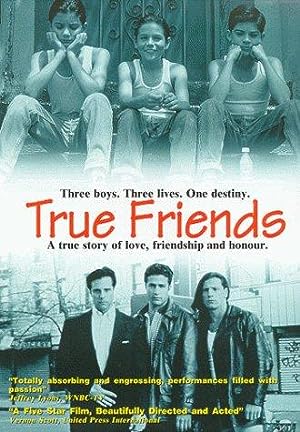 Be the first to review “True Friends 1998” Cancel reply