With the birthday party of the most beautiful girl in the whole class coming in less than three weeks and the beginning of the summer holidays, Maik, a diffident 14-year-old teenager, has definitely a lot on his mind. To make matters worse, Maik’s mother, a caring but alcoholic tennis nut, is in-and-out of the beauty farm aka the rehab facility, and his father, who is a real estate developer, is simply indifferent. Under those circumstances, the unexpected arrival of a new classmate, Tschick, will create quite a stir when the two class rejects will boldly decide to hit the road in an old “borrowed” light blue Lada, going from uncool to cool in a split second. As they set off on an unforgettable joyride in East Germany’s great outdoors, without a cell phone or a map, the boys will learn about self-confidence, mutual friendship and the excitement of youthful love, in what will be, hands down, the best summer ever.

Charming, amiable teen-age comedy with a few moments of sadness thrown in as well. Two 14 year old ‘outsider’ boys in Berlin form a friendship, and take off for the country in a stolen car, seeking adventure.

The odd couple of friends here are pretty endearing. There’s no big, obvious reason Maik is an outsider. He’s OK looking, not a bad kid, not a teacher’s pet or a bad boy. He just has the bad luck of not standing out enough to make him cool, so he’s become a non-entity in his class. His counterpart – the very hard to overlook Tschick — is an extremely tall Russian immigrant ‘new-kid’ with a silly hair cut and a bad-ass tough attitude. Their bond is sweet, and somehow believable.

Based on a popular young-adult German novel, “Tschick” is not as edgy, odd and original as most of Akin’s films, but has just enough quirk and personality to keep it from falling into feeling too familiar, even if the basic story is a variation on something we’ve seen many times. Of all Akin’s earlier films probably the closes analog is “In July” (2000) – a familiar rom-com story given a personality through Akin’s approach.

If not the revelation I was hoping for given the brilliance of Akin’s best films (“Head-On”, “The Edge of Heaven”) it’s still a likable coming of age film with it’s own bittersweet take on the world. 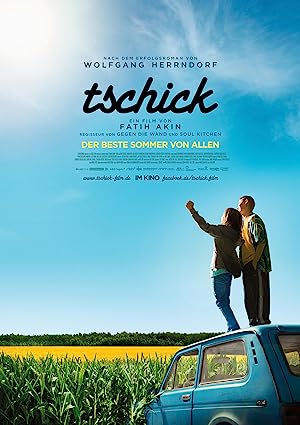 1 review for Tschick 2016 with English Subtitles